Benefits and Risks of Neutering, An Evidence Update: Effects of Neutering on Longevity and Cause of Death in Dogs

Another new study has recently been published addressing the complex issue of the risks and benefits of neutering dogs. This report certainly will not answer all the outstanding questions or quiet the debate about when and if to neuter dogs, but it does add some useful information.

The Study
The study was a retrospective analysis of records from the Veterinary Medical Database (VMDB). This is a collection of medical records from veterinary school teaching hospitals going back to 1964. The authors pulled all records in this database for dogs seen at participating hopsitals between 1984 and 2004, a total of over 80,000 records. They excluded individuals with missing information about relevant variables (such as neuter status, age at death, and so on). The final analyses involved over 40,000 records. Slightly over half of the subjects were neutered, and slight less than half were intact at the time of death (56.4% and 43.6% respectively).

Results
Life Span
Overall, males lived about 14% longer when neutered, and females lived about 26% longer when neutered. From the Kaplan-Meier plots presented, it appears differences were less after about 12 years of age. This is interesting in light of the reports of another study, on Rottweilers, that suggested exceptional longevity was more likely in animals not neutered or neutered later in life. It may be that those individuals who achieve exceptional longevity are different from those who do not in ways that outweigh any effect of neutering on longevity, and thus they may not be an appropriate population in which to study the effect of neutering on life span.

Cause of Death
The table below shows the odds ratios for sterilized males and females compared to intact dogs for specific categories of causes of death. 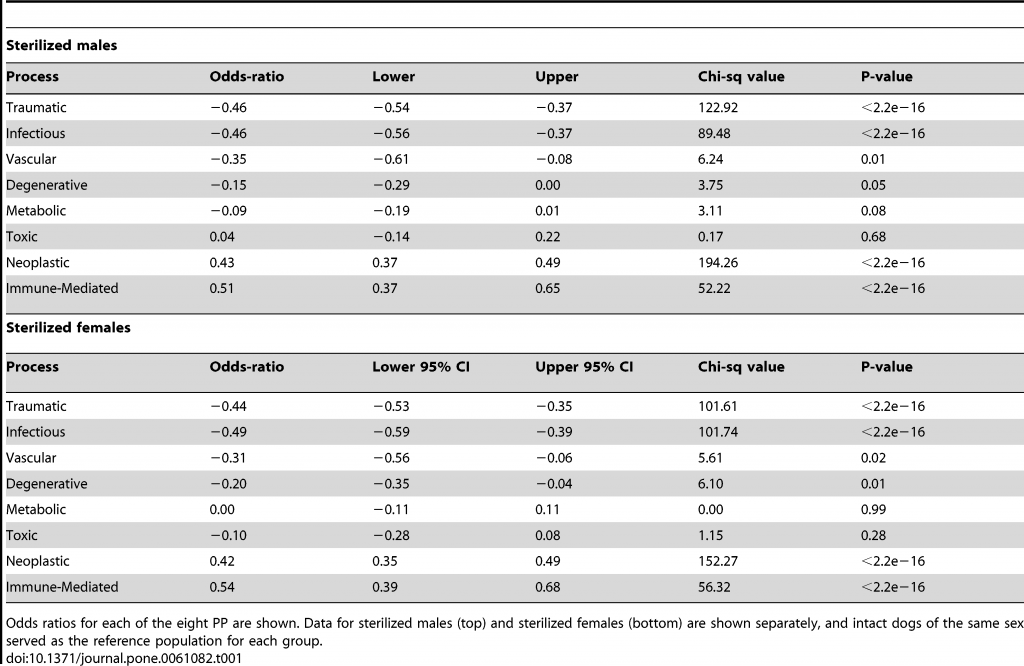 Sterilized dogs were significantly less likely to die from infection, trauma, degenerative disease and vascular disease. They were significantly more likely to die from immune-mediated disease and cancer. Most of these differences held for both males and females and when the effect of age was accounted for, meaning that sterilized and intact dogs did not die from different causes simply because they died at different ages.

Specific cancers were examined if they occurred in more than 1% of the total population. Sterilized dogs were at greater risk for death from all of these eight types of cancer except mammary cancer, supporting the notion that neutering in females is protective against this disease.

It is important to remember that these are relative differences in risk. Other studies have shown that the incidence of mammary cancer may be much higher than of the others, such as lymphoma and osteosarcoma, and that breed plays a role. So if neutering is protective against a very common cancer and increases the risk of a very rare cancer, overall it may still be safer to be neutered than not. That is why overall life expectancy information is relevant as well. It makes sense to perform an intervention that raises the risk of a rare disease if most patients still live longer because they are protected against a common disease.

Several specific infectious diseases occurred with sufficient frequency to be analyzed individually. Sterilized dogs were at lower risk of death due to four of these five disease. However, these results are a bit more problematic than those concerning cancer risk. Unlike most cancers, the parasitic and infectious diseases listed are almost all completely preventable with proper vaccination or other preventative veterinary care. This raises the question of whether differences between sterilized and intact animals in these causes of death may be confounded by differences in the level of care they receive, in the socioeconomic status of their owners, in the time and place in which they lived, and many other variables not specifically addressed in this study.

It is interesting that the same patterns in differences between cause of death in neutered and intact dogs were seen across many different breeds, each with their own specific risk pattern for particular diseases. Cancer, for example, appeared to be a more common cause of death in neutered compared to intact animals even in breeds with relatively low rates of cancer. This strengthens the idea that neutering is directly associated with the risk of such disease and also emphasizes the importance of considering the absolute, rather than relative risk, and the overall risk picture in any individual patient.

Limitations
There are a number of significant imitations to this study. As already mentioned, there are many potential confounding variables not addressed, including the time and place where subjects lived, the overall level of veterinary care they received, the socioeconomic status of their owners, the purpose for which the dogs were owned (work, companionship, breeding, etc), and many others.

In particular, the higher risk of preventable causes of death in sterilized dogs might be simply a reflection of less aggressive preventative veterinary care in these patients. However, studies in humans and in mice have suggested that infectious disease risk is lower in neutered individuals in the absence of differences in environment, resources, or preventative healthcare, so there may be a true biological relationship at work as well.

The authors also acknowledge that lack of information about the age at neutering and previous reproductive activity is a significant limitation. And it is understood that patients at university veterinary hospitals are often representative of a very different population than those seen in general practice, so the applicability of these results to the general dog population may be problematic.

Nevertheless, this study has a number of strengths and cannot simply be dismissed. The size of the population and the ability to correct cause of death for age and breed are particularly important in identifying real general associations between neutering and health that can be further investigated. Comparisons between this population and dogs in Europe, where neutering is uncommon, would be particularly useful in establishing the specific effects of neutering on disease risk for both males and females across a range of breeds, sizes, and lifestyles.

As I have often said, I believe it is a good thing we are questioning the established dogma about universal early neutering, which is based on pretty limited evidence, I think it would be unfortunate, however, to replace it with another dogma on the basis of, as yet, no better evidence. I suspect a siple rule that can easily be applied in all cases (always neuter, never neuter, neuter before/after Age X, etc) is never going to be reliable because physiology is simply more complex and nuanced than that. Recommendations about neutering any specific individual will have to take into account the overall picture of risks and benefits based on age, sex, breed, size, life circumstances, and other variables. As always, we must try to tailor our recommendations to the specific needs of individual patients using the best available evidence to inform, but not blindly dictate, what we recommend.

16 Responses to Benefits and Risks of Neutering, An Evidence Update: Effects of Neutering on Longevity and Cause of Death in Dogs