WVC 2015: Can We Trust the Scientific Literature?

Evidence-based veterinary medicine (EBVM) is the explicit and deliberate integration of scientific research evidence with the circumstances and needs of individual patients to support clinical decision making. It requires that the practitioner be able to find and critically evaluate published reports of scientific research, and it therefore requires that these reports be accurate and reliable. But there is abundant evidence in human medicine that published research findings can often be misleading due to uncontrolled sources of error and bias. There is far less research concerning this problem in veterinary medicine, but a few studies have suggested the veterinary literature may suffer from similar weaknesses.

BIAS IN THE HUMAN MEDICAL LITERATURE

The design of scientific research studies is specifically intended to control for known sources of bias. The way that study subjects are selected and assigned to different groups, the way that researchers and subjects are blinded to the nature of these groups, and the way in which the resulting data are analyzed can all reduce error and lead to more reliable results. However, when studies are poorly designed, conducted, or reported, hidden bias can remain and the results can be misleading.

A clear source of potential bias is the funding for a study. In the human medical literature, funding source has been shown to be associated with outcomes in predictable ways that indicate bias is present. This bias can be reduced by strict adherence to standards of study design and conduct. However, evaluating the quality of these controls for bias requires that the methods used be adequately reported, and again the human medical literature shows that often insufficient information is present in many published reports to allow accurate assessment of the risk of funding bias.

The same is true for many sources of error in the human medical literature, such as publication bias, selection bias, information bias, confounding, and others. Often, the steps necessary to effectively minimize these sources of error cannot be assessed because the published reports provide insufficient information about how the studies were conducted. Some of the core aspects of study design and conduct, such as subject allocation and allocation concealment, blinding, and handling of subjects lost to follow up, are commonly not adequately reported or not properly implemented.

BIAS IN THE VETERINARY MEDICAL LITERATURE

There is less information about potential bias in the veterinary literature. The studies that have been done suggest that the quality of reporting is generally very low, and the risk of bias in individual studies is often be impossible to determine because of insufficient information. Several studies have found serious deficiencies in the reporting of randomization methods, blinding, and handling of losses to follow up, and serious problems with the quality of statistical methods employed in many study reports.

Even though risk of bias can be difficult or impossible to determine when reporting quality is low, some researchers have found that poor reporting is associated with a higher likelihood of positive results in published studies. This at least suggests that poor reporting may signal that the results biased in favor of the investigators preconceptions. Little research has been done on the subjects of funding and publication bias in the veterinary medical literature.

I am currently conducting a systematic review of veterinary clinical trial reports intended to evaluate the quality of reporting and the risk of bias using instruments commonly used for this purpose in the human medical literature. Preliminary results suggest very poor quality of reporting generally, with some variation across species areas. Because of this poor reporting, it is difficult to assess the risk of bias in veterinary clinical trial reports. However, consistent with previous studies, these data do suggest that reporting quality is associated with the likelihood of positive outcomes, suggesting again that poorer quality studies are more likely to generate results consistent with the hypothesis under investigation. If this represents uncontrolled bias, then these results may be misleading.

This study does not consider the issue of publication bias since it is difficult to identify unpublished veterinary clinical trials. Unlike in human medical research, there is currently no widely used or mandatory registry for clinical trials, making it difficult to detect studies which may not be published due to negative results.

WHERE DO WE GO FROM HERE?

The deficiencies in the veterinary clinical trial literature are not a reason to abandon evidence-based medicine. EBM has had significant benefits in terms of patient care when implemented in the human medical field, and it is likely to be equally beneficial in veterinary medicine. However, the ability of veterinarians to practice EBVM is hampered by the limited reliability of published veterinary research, and steps should be undertaken to improve the reliability of the literature. Such steps could include mandatory reporting guidelines adopted by journals, funding agencies, and research institutions. This would improve the quality of reporting, which would make it easier to accurately assess the real risk of bias in published studies.

A number of organizations are also currently working towards the creation of a clinical trial registry for veterinary studies. This would greatly improve our ability to assess potential sources of bias, including publication bias and bias associated with losses to follow up in studies. If such a registry contained the original data collected, it would also help identify and deter questionable analytic or statistical practices.

Controlled scientific research is clearly superior to informal methods of evaluating diagnostic and therapeutic interventions because it minimizes the role of biases of all kinds. However, this function cannot be performed effectively if proper methods of study design and conduct are not employed. And the reliability of published evidence cannot be critically evaluated if the necessary information is not reported. A key feature, then, in the development of evidence-based veterinary medicine needs to be improvements in the quality and reliability of the veterinary medical literature. 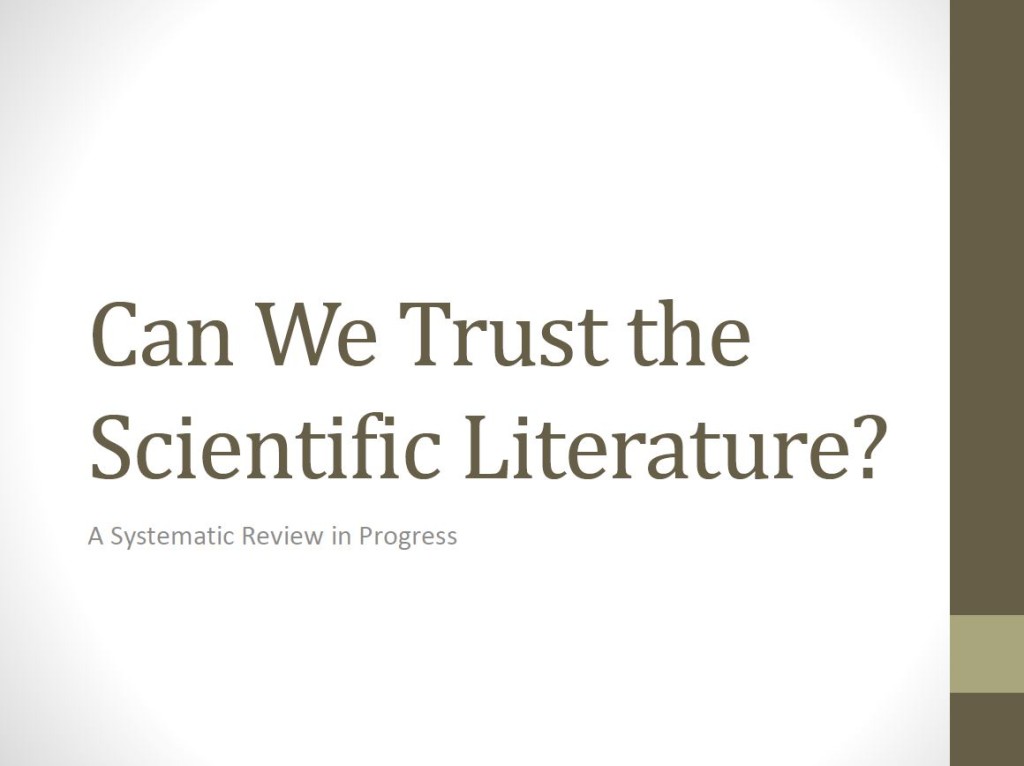