Causes of Death for Dogs by Breed and Age: An Important New Study

It has long been recognized that there are patterns in the causes of death for our dogs. Younger dogs die from different things than older dogs, and different breeds have greater or lesser risk of dying from different causes. Understanding these patterns is helpful in many ways. It helps owners know what sort of problems to watch out for in their pets. It helps veterinarians focus on the most likely cause of a particular dog’s illness. And most importantly it guides us in identifying specific risks for individual patients and taking action to minimize these and prevent or delay illness and death.

Causes of death also change over time, and they are influenced by how we care for our pets. Nutrition, vaccination, neutering, confining pets rather than letting them roam, and many other factors under our control influence the causes of mortality in our pets. But the relationship between these things and what our pets die from isn’t always what we think it is. There is a lot of mythology and misconception out there about the risks our pets face, and it requires careful, objective, and laborious research to identify the true mortality patterns that will then let us identify the best ways to reduce these risks.

A new study from the University of Georgia makes a major contribution to our understanding of the causes of mortality in different breeds of dog.

This study  involved sifting through 20 years of records from the Veterinary Medical Database, a collaborative resource that includes records from 27 North American veterinary medical school teaching hospitals. Causes of death for over 75,000 dogs in this database were identified of the relationships between cause of death, age at death, and breed were analyzed. The results are occasionally surprising, or fill in gaps where no previous data were available, but they also often confirm recognized patterns long established for humans and previously demonstrated or expected for our dogs.

Causes of death were categorized in two ways: by the organ system involved, and by the category of disease (called the “pathophysiological process”). This allowed the investigators to identify both what specific organs in the body were most often involved in fatal disease for individuals of each breed and also what kind of disease led to death. The figure below shows the percentage of dogs in the study whose deaths could be attributed to specific kinds of disease of disease in particular organs, both for juvenile animals (less than 1 year old at death) and adults (over 1 year old at death).

Overall, this shows that the organ systems in which fatal disease arises are remarkably similar for young and old dogs. And the relative contribution of particular organ systems to mortality is fairly even, though the gastrointestinal, nervous, and musculoskeletal systems tend to be involved more often, and the skin, eyes, liver, and glandular systems are less commonly involved. The figure also illustrates that the causes of death are quite different for dogs of different ages. Young dogs are overwhelming likely to die of infection, trauma, or congenital disease, whereas cancer (neoplasia) is by far the greatest cause of death in older dogs.

The other figure that I think most effectively illustrates the findings of this study, shows the frequency of particular causes of death at different ages. This contains, in some ways, the same information as the chart above, but it helps to clarify quite nicely what I believe is a key pattern. 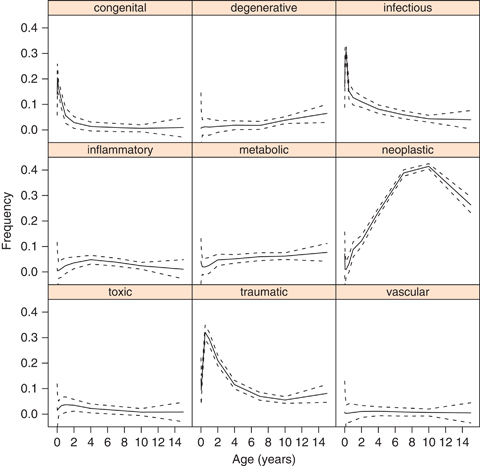 Figure 3. Relative frequency of causes of death by pathophysiologic process (PP), as a function of age (years) for all breeds with more than 100 representatives (n = 46,720, excluding 25,656 individuals unclassified for PP)… Estimates are provided for each of 10 age-classes, with points connected by a solid line to highlight any obvious age-related trends. Dashed lines represent 95% confidence intervals.

Again, clearly death from infection, trauma, and congenital diseases are by far the most common before about 2 years of age, and the risk of cancer rises steadily with age until it peaks at about 10 years, Interestingly, the cancer risk overall then drops after this age, though it is still the most common cause of death.

The paper also contains a lot of information about the most common causes of death for many individual breeds, which it would be cumbersome to reproduce here. Some patterns are familiar to many veterinarians, such as the relatively higher incidence of cancer deaths in Boxers and Golden retrievers than in many other breeds, and the high frequency with which small breed dogs suffer from neurologic and cardiac disease. However, other patterns have not previously been identified in scientific research, such as the high rate of cancer deaths in Bouvier de Flandres dogs and the relatively high rate of cardiovascular causes of death in Fox Terriers. More detailed and specific research will be required to sort out the causes, and possible treatment or preventative interventions, involved in these breed-specific patterns. However, this study gives us many new and potentially useful targets for such further investigation.

So what sort of useful conclusions can we draw from these data? Well, we can say, for example, that cancer is a disease associated with aging, and it is far more common in older dogs than in younger dogs. And, despite the claims sometimes made that it is due to chronic exposure to toxins in commercial dog food, vaccination, and so on, the fact is that the incidence of cancer increases with age in all breeds regardless of differences in lifestyle, and that it also becomes less common in the oldest individuals. If it were simply a matter of the risk going up the longer dogs were exposed to such purported environmental toxins, then the risk should continue to rise steadily with age. However, it is well established in humans that there are genetic predispositions to cancer as well as age-associated increases in risk, and that those individuals who survive to extreme old age are relatively less likely to get cancer since they appear to have protective genetic constitutions. The variation in cancer risk by breed and the age-associated patterns seen in this study show a similar pattern.

In short, cancer occurs largely as a result of the interaction between genetic risk factors and age, with lesser contributions from environmental influences that also interact with genetic factors. Cancer is what you die of if you’ve avoided dying of infectious disease and trauma and lived long enough to get it. The relative increase in cancer as a cause of death in our dogs over the last few decades is a sign of our success in reducing the importance of these other causes, not a damning indictment of our toxic environment or nutritional and vaccination practices.

There are, of course a number of limitations and caveats to the data in this study and the conclusions we draw from them. Perhaps the greatest of these is that the dogs studied were individuals seen at veterinary teaching hospitals. These hospitals typically see the sickest patients and the most complex or unusual cases, since less severe or common problems are often taken care of by private practice veterinarians. And some research suggests that many dog owners do not routinely seek veterinary care at all, much less the high-level care offered at a teaching hospital. So the study population may not be representative of the overall dog population, and the particular causes of death may not accurately reflect those of all dogs, even if the general patterns are the same. If, for example, dogs not seen at teaching hospitals are less likely to have recommended vaccinations or other preventative care, or are less likely to be taken to a vet if injured, then the relative contribution of infection and trauma as causes of death may be higher in the general population than in the dogs in this study.

And the information in this report doesn’t specifically tell us how common specific causes of death are in particular breeds or particular ages, that is the absolute frequency of these causes. To figure that out, we’d need to know something about all the dogs of each breed at each age who didn’t die. The data can only tell us the relative frequency of different causes in each breed. And we can’t yet know about changes in these risks over time, or about regional differences, though the authors are apparently continue to analyze the data to find some of those answers. It will be interesting and useful to see what trends are identified over time in these data. I would expect, for example, that the relative importance of infectious disease as a cause of death would decrease over time as prevention and treatment improve and are utilized by more pet owners. But only time and the hard work of these researchers will tell.

Still, this is an important study which adds significantly to our understanding of the causes of death in our canine companions and which will help guide future efforts to understand these causes and reduce or eliminate those risks we can.

30 Responses to Causes of Death for Dogs by Breed and Age: An Important New Study