Storyteller’s Creed–How do you feel about this?

There’s a pretty good argument to be made that a lot of the differences between people’s opinions on controversial issues have more to do with differences in temperament and its influence on world view than with the facts or arguments related to specific conflicts. Journalist Chris Mooney has made a compelling case, based on extensive research in psychology, that our political opinions, for example, are shaped more by our temperament than our experiences. And that temperament is determined largely (perhaps 70%) by our genes.

Such a theory certainly seems to explain some of the ideological divisions in the U.S. today, and the intense and reason-proof arguments often seen around so-called “culture war” issues. It would also explain why facts and rational arguments are of so little value in challenging faith-based beliefs, both those pertaining to alternative medicine and those in other domains. Ultimately, a clash of philosophies, built largely on a clash of personalities, may underlie arguments that seem like differences of opinion about factual matters but which seem insoluble and intransigent no matter how much data is available.

Of course, this is a simple theory about a complex subject, human belief and behavior, and it may very well not be correct. Certainly, it can’t be said to be established beyond any reasonable doubt. Still, I find it intriguing and perhaps enlightening.

I ran across the credo below at an art fair last week. My own reaction to it was that it represented the kind of thinking that is behind many of the worst choices and arguments people make. Willful denial of reality in favor of what we wish were true can’t be a sound basis for decisions, in medicine, politics, or any other area involve the world outside our own minds.

I would never deny the importance and power of imagination, hope, love, or other core human feelings. Anyone who knows me will attest I am nothing if not intense in my feelings. Still, I find this set of statements naïve at best and perhaps even a little offensive. Obviously, others see it in a much more positive light. I suspect, though I can’t see any way to prove, that how one reacts to this credo might very well be predictive, to some extent, of how one views religion, alternative medicine, and other areas of conflict between reason and emotion, skepticism and faith.

I’d be interested in any thoughts or reactions to the series of principles that inspired it. 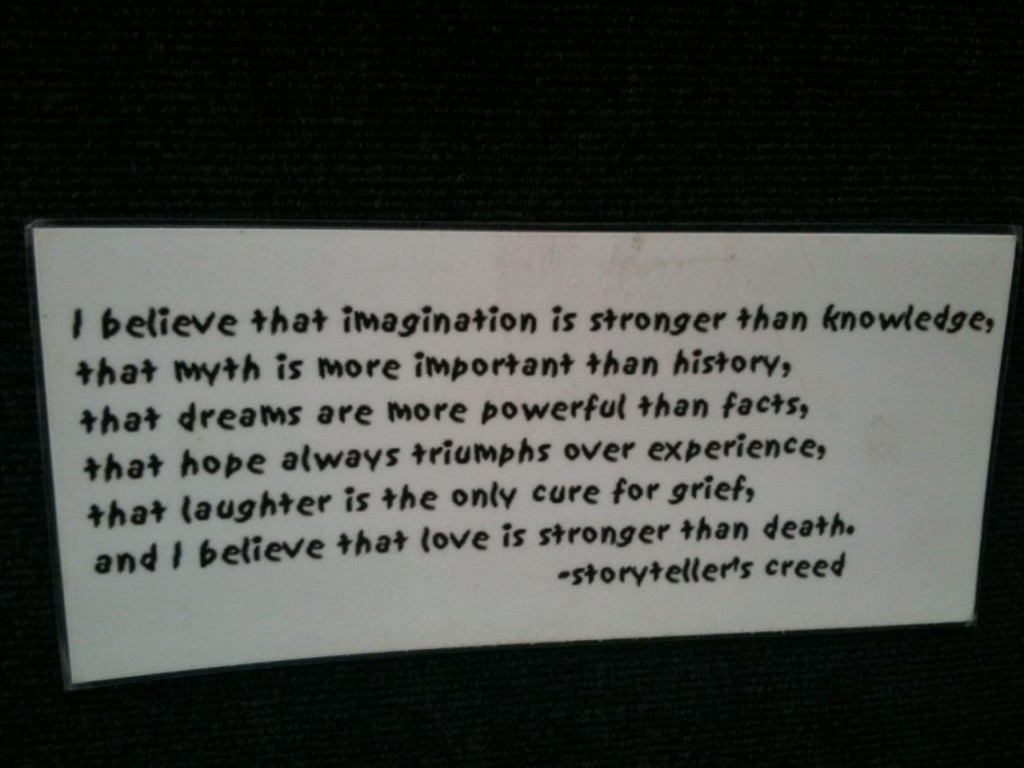 9 Responses to Storyteller’s Creed–How do you feel about this?