Benefits and Risks of Neutering, an Evidence Update: Study Investigates Effects of Neutering in Golden Retreivers

Given that I recently presented a couple of evidence-updates on the subject the health effects of neutering, the timing was excellent for the release last week of a new research study looking at the same issue.

This was a retrospective cohort study in which records were searched to identify Golden Retrievers who had been patients at the UC Davis veterinary school, were between 12 months and 8 years of age, and who could be classified as having been neutered “early” (before 12 months of age), “late” (after 12 months of age), or not at all. The occurrence of a number of diseases common in Golden Retrievers was then evaluated to see if it differed between dogs in these three categories. There are several reasons to be cautious in how we interpret the results of this study, but let’s start by looking at what those results were.

The authors looked at the occurrence of hip dysplasia (HD), elbow dysplasia (ED), cranial cruciate ligament rupture (CCL), and a number of cancers com including lymphosarcoma (LSA), hemangiosarcoma (HSA), mast cell tumor (MCT), osteosarcoma (OSA) and mammary cancer (MC). The figures below illustrate the relative occurrence of some of these diseases in males and females by neuter status (the diseases not shown did not occur often enough to be included in the analyses). 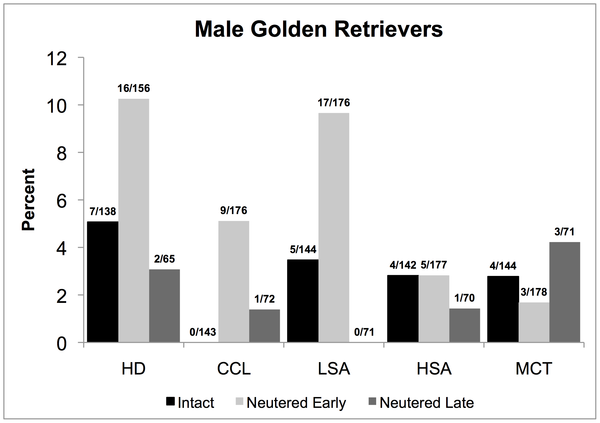 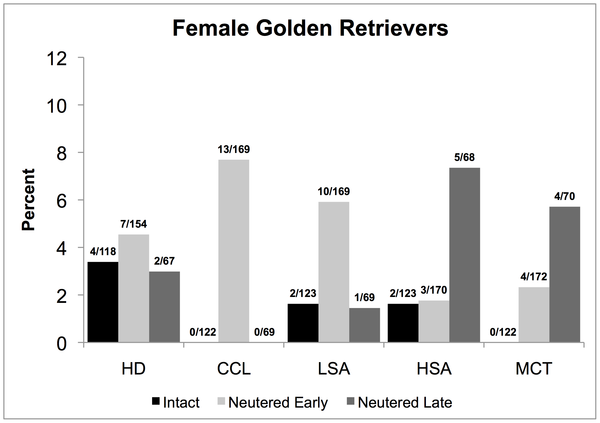 These results suggest that there is a complex and inconsistent pattern of associations between neuter status and these diseases. In general, there was a tendency for neutered animals to have higher rates of these diseases than intact animals and for early neutered animals to have higher rates than late neutered animals. However, there are many cases in which differences were not statistically significant or the difference was significant in one sex but not the other, and a few in which the direction of the difference was opposite that expected (for example with HAS occurring more often in late-neutered females than either intact or early neutered females).

The difficulty lies in knowing what these results mean in terms of predicting the risks for individual pets and making decisions about neutering in general. The natural tendency will be to look at these data and conclude that not neutering, or neutering after 12 months of age, is safer than the common current practice of neutering most animals before 12 months. However, this is not a conclusion we can reliably draw from these data.

To begin with, this is a group of dogs that are, in many ways, very different from most dogs neutered by veterinarians. Apart from only representing one breed, and a breed known to have higher rates of the diseases studied than most other breeds, the subjects were patients at a university veterinary hospital. In general, only the sickest animals with the most unusual or serious diseases are seen at universities. Most healthy animals or those with typical illness are seen at general veterinary practices. So it is uncertain if neutering will have the same effects as in this study on dogs of other breeds or those healthy enough to have never seen the inside of a university hospital.

The population also contained small numbers of intact and “late” neutered dogs. This makes it more likely that small, random differences in the health of individual dogs in the study group could alter the apparent effects of neutering on health.  And the authors chose to limit the study population to dogs between 12 months and 8 years of age. Quite a few Golden Retrievers live past 8 years, and the rates of cancer generally go up dramatically with age. If the proportion of these diseases among intact and neutered animals over 8 years old are at all different from those in dogs under 8, then the direction and statistical significance of the differences between groups seen in this study could easily be altered.

And it’s important to consider the absolute risk and benefit numbers when making decisions about whether to neuter. If, in fact, neutering is strongly protective against a common cancer (as it is thought to be for mammary cancer) but also slightly increases the risk of a rare cancer, it may still make sense to neuter early depending on the unique situation of an individual patient.

Finally, two of the major diseases against which neutering is thought to be protective in females, uterine infection and mammary cancer, did not occur often enough to be included in the analysis. This may be because relatively few of the dogs were intact or because of the age cutoff. Obviously, if there really is a protective effect of neutering on these diseases that didn’t show up in this study, that might influence the interpretation of the results.

Overall, this is a useful piece of research adding to the information we have about the pros and cons of neutering and the possible role of age in the effect of neutering on disease. It should be over-interpreted as the final word by itself, but it should be incorporated into a broad analysis of all the available evidence.

As it stands, there is reason to believe early neutering has significant benefits in females, though as the recent systematic reviews pointed out the evidence behind this belief is not strong. There is also reason to be concerned about possible risks, though the evidence for this is also not robust yet. On balance, one can make a reasonable case on both sides, and the risk profile for individual dogs, as well as larger issues such as the problems associated with unwanted reproduction. Anyone who says there is an absolute and universal right answer concerning if and when to neuter female dogs is exaggerating by quite a bit.

For males, I believe the evidence of benefits from neutering, especially before 12 months of age, is not compelling, and I don’t see a strong reason to neuter earlier in the case of owned dogs with owners willing to commit to preventing roaming and unwanted reproduction and in the absence of intolerable interdog aggression. For large breeds in particular, delaying neutering of males seems reasonable, though we very much need better evidence to have confidence in such a recommendation. It is encouraging that more attention is now being paid to the complexities of neutering and the risks and benefits associated with it, and I am optimistic that this will lead us to more reliable guidelines in the future.

12 Responses to Benefits and Risks of Neutering, an Evidence Update: Study Investigates Effects of Neutering in Golden Retreivers