Basic epidemiological research, identifying the most common diseases and causes of death and risk factors for these, is the foundation of preventative medicine. Unfortunately, such research is often scarce in veterinary medicine. Collecting data on a large population of animals over an extended period of time is expensive and time-consuming, and since there is generally no direct economic incentive for doing so and little private or government funding for such research, studies like this are seldom done.

Some longitudinal data have been collected by insurance companies, large corporate practices, and some non-profit organizations supporting veterinary research. A recent paper has reported some information from another source, VetCompass. This is an effort of the Royal Veterinary College to collect clinical data from private veterinary practices and use this data to improve our understanding of health and disease in veterinary patients. This is a potentially rich source of information, and such efforts could contribute significantly to the evidence base needed to improve healthcare for our pets.

A brief version of the results can be found on the VetCompass site. The study used data from over 100,000 cats at 90 different practices in England, which allowed for some pretty robust statistical analysis. A random sample of cats who had died was used to investigate longevity and causes of death

A couple of interesting patterns emerged from these. The median longevity was 14 years, but this did vary quite a bit by breed, and there were two peaks in mortality—one at 1 year of age and another at 16 years of age (Figure 1). This suggests that cats pass through a period of relative high risk at about 1 year, but those who get through this time have a could chance of living well into their teens. 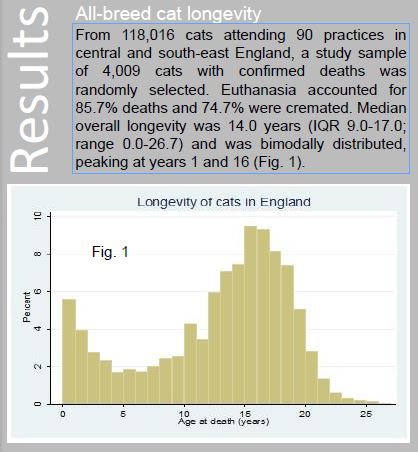 The leading cause of death is listed as trauma, which I initially found surprising (Table 2). However, when causes of death are broken down by age group, this is the #1 cause for cats under 5 years of age. It is still #6 for cats over 5, which suggests a higher proportion of outdoor cats than I typically see in my area. For the young cats, trauma accounted for 47% of the death (half of these from road accidents), far more than the second-leading cause of death, viral infectious disease, which accounted for only 6.6%.This is a reminder of why an outdoor lifestyle is a very risky one for domestic cats.

For cats over 5 years of age, kidney disease was the leading cause of death, accounting for 13.6% of the deaths evaluated. Unfortunately, the second-leading cause was the rather uninformative category of “non-specific illness.” 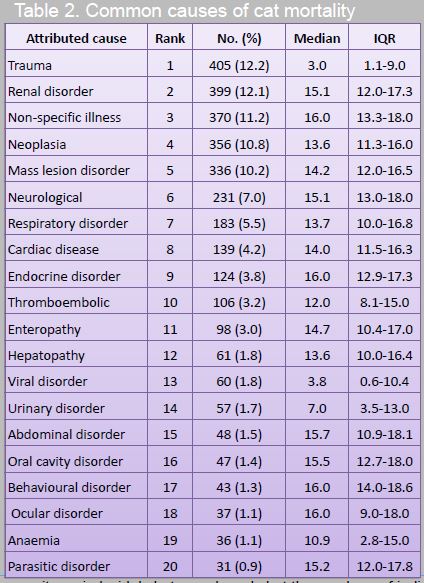 The study also used a linear regression analysis to evaluate factors associated with longevity. In addition to finding that mixed-breed lived longer than purebred cats, the data did show a longevity benefit to neutering. Neutered female cats lived roughly six months longer than intact female cats. Intact male cats, however, died nearly two years younger than neutered male cats. The reasons for this difference are likely multiple. While neutering has been associated with greater longevity in a variety of species, and there seems to be some underlying physiological factor that contributes to greater longevity in neutered individuals. However, there are also likely other differences that have more to do with husbandry than biology. If, for example, neutered male cats are less likely to be allowed outside than intact male cats, which is almost certainly the case, then the risk of being an outdoor cat will confound any apparent effect of neuter status on longevity.

There are, as always, limitations to this study. The accuracy of causes of death could not be independently verified, and many were lumped under the vague heading of “non-specific illness.” The evidence that comes out of retrospective studies of medical records is only as good as the information that goes into the records, so there is always a significant risk of error when dealing with a large and diverse group of clinicians who haven’t all been trained in the same way to use the same record-keeping practices.

The results of this study also apply only to the population studies, which means cats of this particular mix of breeds, lifestyles, and those with similar husbandry and environmental circumstances. The results likely would be different in some significant respects from, for example, an urban U.S. cat population. Nevertheless, the accumulation of such information from different sources over time provides valuable knowledge about the factors that influence health, disease, and longevity in our pet cats, and more such research is critical to improving the care we provide and the health of our pets.

40 Responses to Longevity & Causes of Death in Pet Cats