I have written extensively about the risks and benefits of neutering in dogs and cats. This is an area of active research, and new data emerge regularly to challenge existing beliefs and illustrate the amazing complexity of living organisms and he factors that lead to disease. One subject within this larger field concerns the effects of neutering on cancer risk. The data is complex and inconsistent, but there are some trends that emerge from multiple studies of different types in various populations. Some cancers almost certainly occur less often following neutering, and others almost certainly occur more often, and this relationship is heavily influenced by genetics, most clearly manifested as different effects of neutering on cancer risk in different breeds. A new publication has added a bit of evidence to this subject, which provides a good opportunity to review what we know and don’t know.

This study looked retrospectively at biopsies of both living and deceased dogs included in a cancer registry that has been collecting data since 1955 and compared the results with other information about these dogs, including age, breed, and neutering status. The general findings confirm the results of previous research, showing that cancer risk typically increases with age, that different breeds have different overall cancer risk as well as predisposition to different types of cancer, and that there are exceptions to almost any generalization one can make about cancer in dogs. These are certainly not surprising findings, and they generally confirm the results of other studies.

One finding that was a bit surprising was that mixed-breed dogs did not appear to be at lower overall cancer risk than purebred dogs, which has appeared to be the case in other studies. The difference between the populations studied or the methods used may be responsible for the different findings, but it raises some doubts about the general assumption that purebred dogs are more likely overall to get cancer than mutts.

In terms of cancer risk and neutering, the findings are summarized in the following table. This compares the odds of cancer in neutered and intact animals, separated both by sex (males and females) and also by the method used to detect the cancer (biopsy samples from living animals compared with post-mortem samples from deceased animals). The odds ratio is given, indicating the odds of a particular cancer in the indicated group compared with intact animals of the same sex using the same detection method.

In general, these data confirm the findings of several other studies, though there are differences. Neutering appears to reduce the risk of adenocarcinomas, especially in females. This primarily relates to breast cancer, which occurs much, much more often in intact females than in neutered females or males. Other types of cancer either showed no difference in risk with neutering or appeared to be more common in neutered animals of one or both sexes.

The differences in odds were consistently larger in post-mortem samples. This reflects a source of bias in the data. Samples of testicles and mammary tissue from living animals undergoing surgery are likely commonly submitted, while samples of other types of cancer from other organs are much less likely to be analyzed and submitted to the registry. This influences the numbers of cancers of different types seen, and means that post-mortem submissions are more common for most tumors except breast and testicular tumors, which are more likely to be sampled in animals that are neutered. In any case, the study accounted for this source of bias by separating the data as seen in the table.

The best way to identify real trends is to compare data from different studies, often involving different populations (ages, breeds, geographic locations, etc.) and study methods (clinical patients, cancer registry studies, pathology lab studies, insurance company data, etc). I have collected results from various studies comparing risk between neutered and intact males and females for the types of cancer most commonly thought to be influenced by neutering (other than mammary cancer, of course, which is quite clearly less common in neutered females than in intact females). These data show both some patterns suggesting an increase in the risk of several cancers with neutering as well as some inconsistency in the data, indicating this risk varies by breed and sex and possibly other population factors. 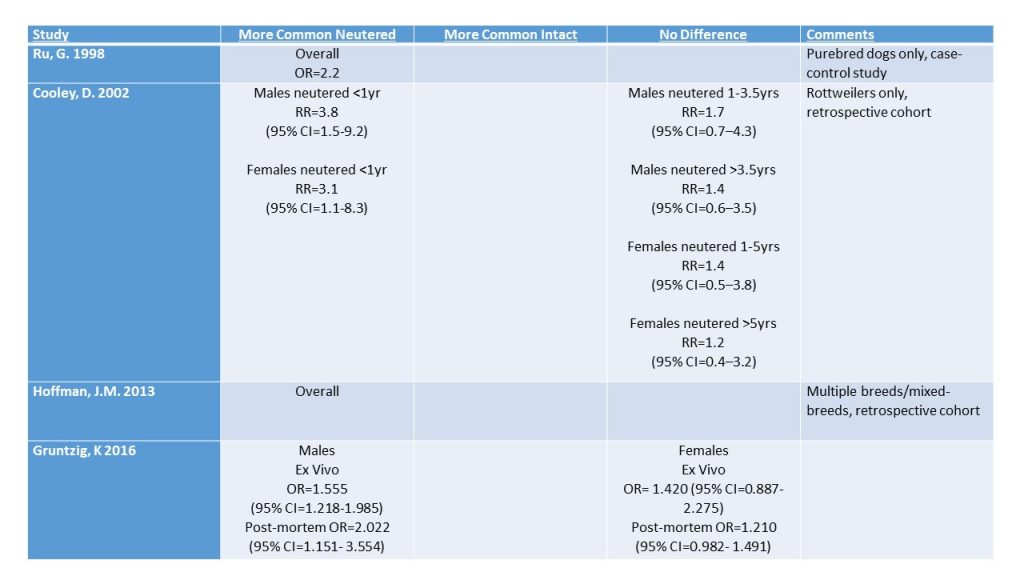 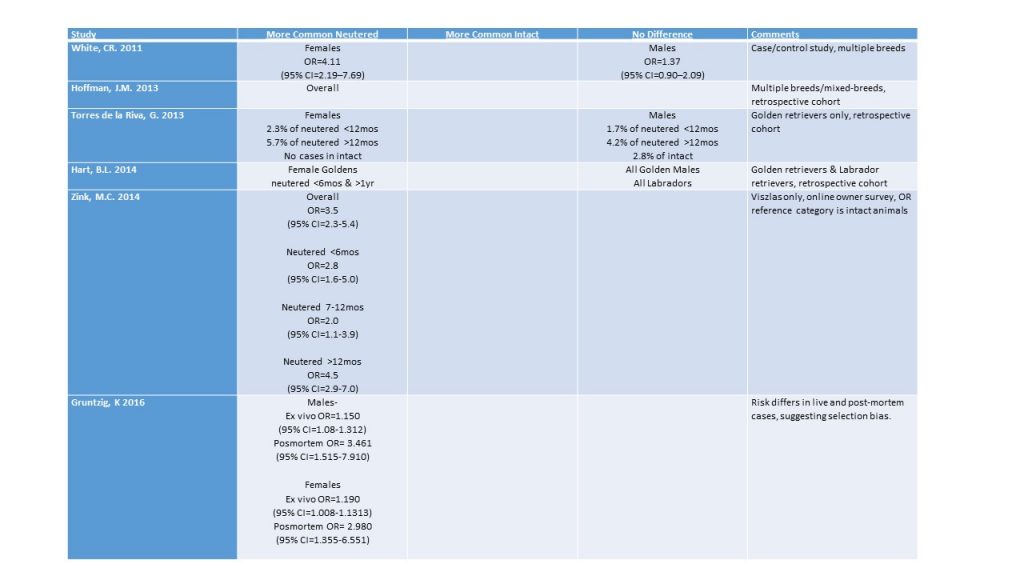 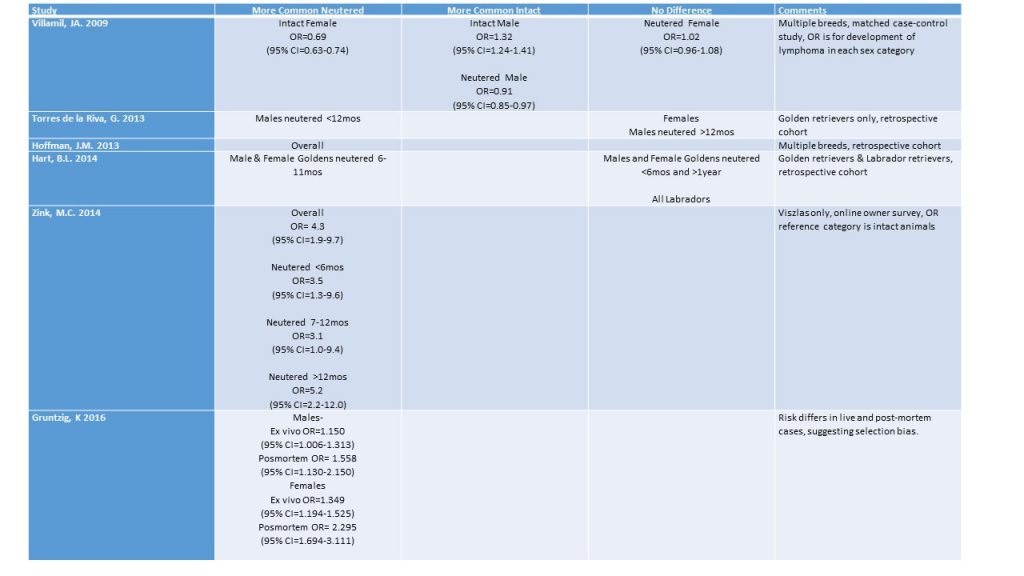 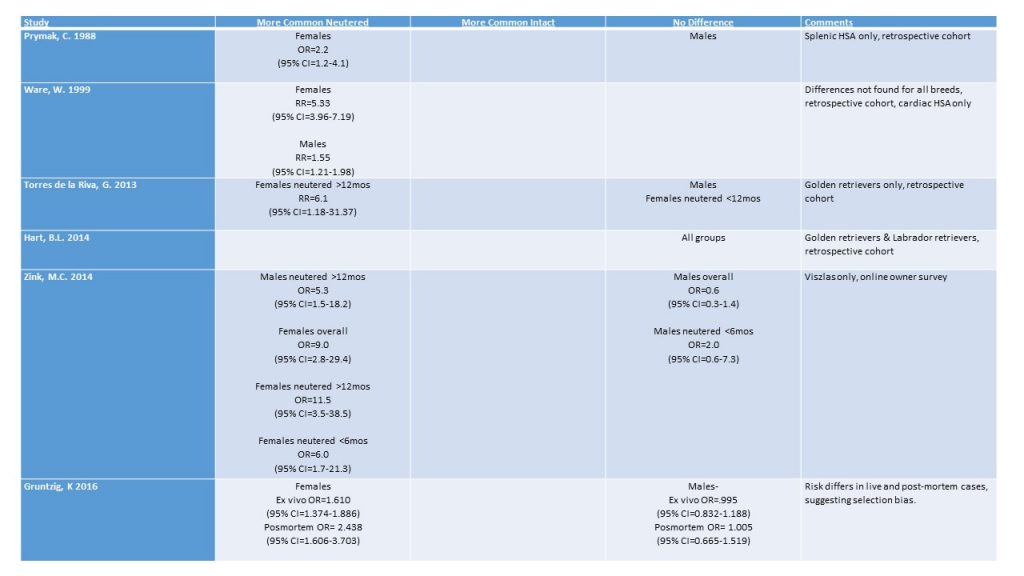 11 Responses to Evidence Update: Neutering and Cancer Risk in Dogs