Another Systematic Review of Homeopathy and–Wait for It– Still No Good Evidence It Works!

Yet another systematic review of veterinary homeopathy has just been published, bringing the total to six. I have discussed several of these before (e.g. 1, 2). They have consistently failed to find high-quality research evidence to support homeopathy in animals, despite the fact that the previous reviews have been conducted by advocates for homeopathy. Most of the studies identified fail even basic methodological criteria for reliability, and there is a lack of consistency and reproducibility to any positive findings. So while there are individual studies that appear to show homeopathy having some effect, a comprehensive review of the evidence at all levels fails to support any specific use. And while this failure might not be damning for a new therapeutic approach, after more than 150 years, it is past time that a truly effective therapy should have been able to prove its worth.

The same conclusion has been reached by many others, from the systematic reviews of homeopathic trials and systematic reviews of these systematic reviews, to the formal investigations of governmental agencies such as the British House of Commons Science and Technology Committee and the Australian National Health and Medical research Council. While homeopaths have had more than a century to try, they have not been able to produce a body of scientific evidence to convince anyone but themselves that homeopathy works.

The latest review is the first in veterinary medicine not written by the group of homeopathy advocates that has produced the previous systematic reviews. Not surprisingly, it too concludes that despite some trials appearing to show benefits, the scientific literature does not provide good evidence sufficient to validate or recommend homeopathy. As well as reinforcing this consistent finding, it also provides support for a number of the objections that I and others have raised regarding the apparently positive literature often cited by homeopaths to justify their claims, including:

The authors made perhaps the most comprehensive search of the livestock literature yet for homeopathy studies. Their goal was to identify any study of homeopathy used in farm animals in a way that might reduce or replace antibiotics, either in the prevention or treatment of infectious diseases or as a growth promoter. Since this is a common use claimed for homeopathy, this is a relevant subject within the larger literature.

From 1981-2014, they found 48 published studies that fit their search criteria. Only 11 of these were double-blinded randomized controlled trials, the best kind of study to evaluate medical treatments. The trials included had a variety of shortcomings. 39 of the studies were considered to have a significant risk of bias based on how they were conducted. Many also included only very small numbers of patients. Some selected a conventional treatment for comparison that did not meet current guidelines or standards for selecting antibiotic treatment, which would have been a misleading comparison.

Slightly over half of the studies showed a positive effect, whereas the rest did not. A number of factors were associated with the chances of a positive finding. For example, the better the study design and the controls used for bias, the less likely a study was to find a positive effect: 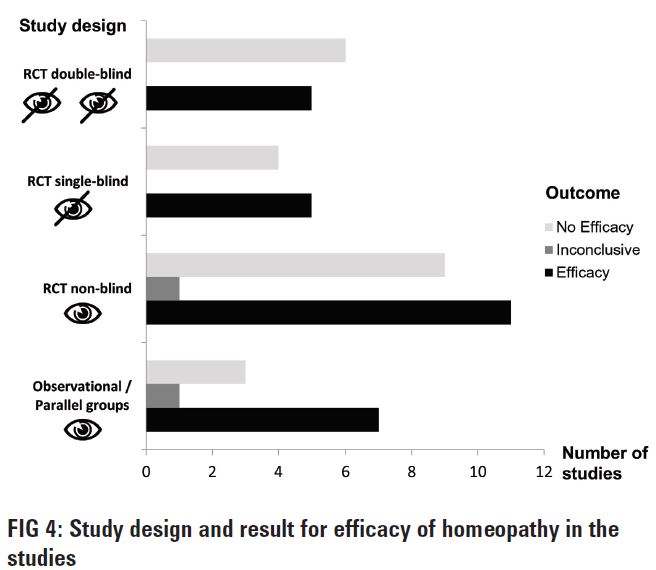 Homeopathic trials performed as a single-blind or non-blind RCT, parallel groups or an observational trial (Fig 4) tended to be more frequently efficacious than a double-blind RCT, indicating that positive outcomes may partly be due to a bias caused by a conscious or unconscious preference for a certain treatment.

Also, studies published in alternative medicine journals were far more likely to show an effect than those published in mainstream journals:

Finally, not a single positive study has been reproduced, which is an essential criterion for establishing an effective treatment:

When taking the total number of studies into account, not even one study was repeated under comparable conditions. Consequently, the existing conditions, which enable a systematic review to be carried out completely are not given. The current evidence of studies providing evidence in favour of homeopathy lacks reproducibility and therefore cannot claim to have sufficient prognostic validity.

This review reinforces the conclusions of previous reviews. Despite 150 years of effort, no reliable, high-quality evidence has been produced showing homeopathy to be consistently effective for any veterinary use. Added to the inherent inconsistency of homeopathic theories with established scientific principles, and the much more rapid and dramatic validation many other treatments have been able to achieve, it is past time to accept that this practice has no value beyond placebo and is inherently a waste of resources and misleading to animal owners.

Follow us
This entry was posted in Homeopathy. Bookmark the permalink.

4 Responses to Another Systematic Review of Homeopathy and–Wait for It– Still No Good Evidence It Works!