Introduction
In 2010 I first evaluated the Chinese herbal remedy known as Yunnan Baiyao, and I have reviewed additional evidence repeatedly since (1, 2, 3). So far, I have found little reason to believe claims that this remedy can stop bleeding in veterinary patients.

The ingredients are poorly described and not regulated or standardized, as is always the case with Traditional Chinese Medicine (TCM) remedies, and it is unclear if they have all been disclosed since the recipe is consider a commercial secret. TCM remedies have frequently been found to contain toxins and unreported pharmaceuticals, and some YB tested has been found to contain low levels of toxic substances. The TCM theory for how it works, involving movement of blood and mystical and ill-defined entities such as Qi, is inconsistent with established scientific understanding of physiology and blood clotting mechanisms. There are a number of more scientific theories for how the many chemicals in the product might affect bleeding, but none have been properly validated, and it is recommended primarily on the basis of tradition and anecdote.

Of course, despite the implausibility and lack of a clear mechanism, some clinical research has been done. In humans, the most recent review (from a source known to be biased in favor of TCM treatments, c.f. 3, 4) found some evidence of effect but also found that 1) most of the published research was of low quality and high risk of bias, 2) for some conditions the apparent effect disappears when lower quality studies are excluded, and 3) there is evidence of publication bias, in which negative studies remain unpublished creating an inaccurate impression of the true state of the evidence.

Such weak evidence might justify further research, ideally beginning with full identification of components, basic physiologic and pharmacologic studies, and then progressing through pre-clinical studies before clinical trials, as is the appropriate and expected course of investigating new medications. However, the current evidence does not really justify routine clinical use.

There is also some research into Yunnan Baiyao in veterinary species, and I have reviewed this in my previous posts. A couple of new small studies were recently presented at the American College of Veterinary Internal Medicine (ACVIM) annual forum, so I thought it would be worth reviewing those and summarizing the evidence to date.

The goal of this study was to evaluate the effect, if any, of Yunnan Baiyao on laboratory measures of blood clotting and to look for any obvious, short-term adverse effects. Six laboratory dogs were given the product once a day for six days and clotting measures compared before and during the treatment. No harmful effects were reported, and there was no change in any measure of blood clotting.

The abstract begins with the statement, “The hemostatic efficacy and safety of Yunnan baiyao (YB) has been demonstrated across multiple species.” This isn’t actually accurate, and it reveals a pretty clear bias on the part of the investigators, which is relevant when looking at the methods and conclusions of the study.

Nineteen dogs having nasal biopsies were randomized to Yunnan baiyao or placebo before having nasal biopsies taken, which commonly causes some bleeding. A variety of outcome measures were evaluated, including laboratory values associated with clotting and assessments of how much blood was lost and how long it took the dogs to clot after biopsy. The report indicates appropriate blinding of investigators, caretakers, and statisticians. However, not all dogs were assessed with the same measures, which introduces some inconsistency and variability into the results.

Time for bleeding to stop- Exactly how this was measured is not described. The YB group ha d a slightly shorter BMBT (300+/- 12 seconds vs 367+/- 9 seconds). Several other variables (age, history of nosebleeds, blood pressure, and number of biopsies taken) were also associated with the BMBT, though the details were not reported.

BMBT (time for bleeding to stop from a standardized cut on the gums)- There was no difference between the groups.

TEG (a lab measure of clotting)- There was no difference between the groups.

Total blood loss- It is also not clear how this was measured. There was no difference between the groups.

Despite the failure to find an effect for most measures and the questionable clinical significance of the one difference seen (a difference from 46 to 88 seconds in the time for bleeding to stop), the authors naturally conclude that the study supports using YB routinely before this type of procedure.

Veterinary Evidence Summary
The table below lists all of the actual in vivo studies in veterinary species I have found. It also lists some key features of these studies that help evaluate how reliable their results are, including the number of animals studied, the use of key methods for preventing bias, such as randomization, blinding, and a control group, and the outcomes. 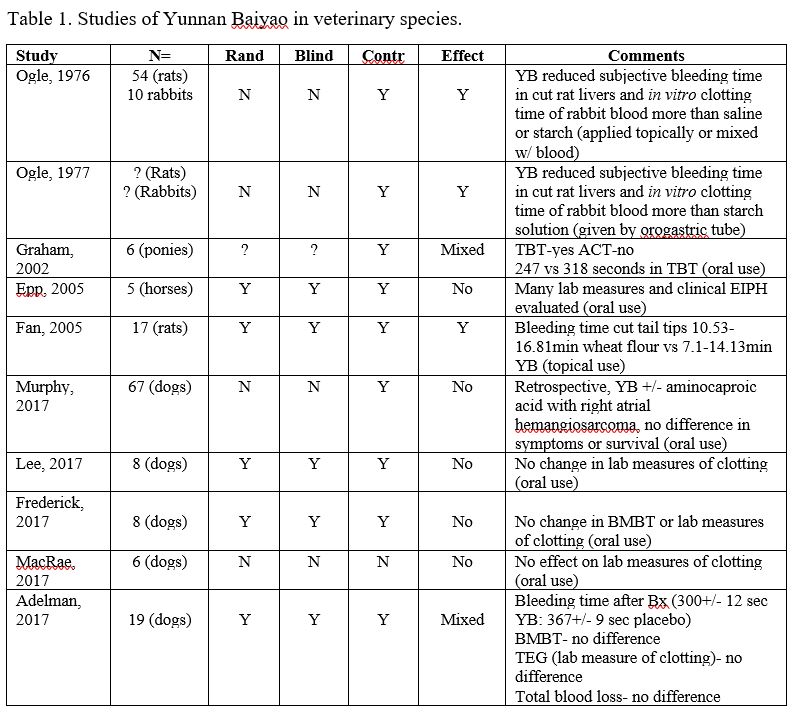 Of these ten studies, 5 found no effect at all, and 2 others showed mixed results, with possible effects in some measures evaluated in the studies but not in others. Of the three fully positive studies, two did not report any of the major methods for controlling for possible bias and other sources of error.

Overall, this is a very unconvincing set of data. Even clearly ineffective methods can have some positive studies due to bias and error alone, so the lack of a clear, consistent pattern of expected effects is troubling. Not all of the studies used the same measures, so it is possible the product could have some clinical effects by some mechanism that doesn’t affect the laboratory measures of clotting usually used, but that is a big stretch.

It is also worth noting that the studies showing some effect didn’t look find any benefit in terms of clinically important outcomes, such as survival, need for transfusion, etc. Even under the most optimistic assessment of the evidence, it may be that Yunnan Baiyao speeds clotting in the case of small wounds by a few minutes, but this may not necessarily have any meaningful benefit for actual patients.

Bottom Line
The TCM rationale for using Yunnan Baiyao is part of an unscientific, quasi-religious belief system and cannot be accepted as a sufficient basis for using an otherwise unproven remedy on patients, especially when the ingredients in that remedy are not fully disclosed or regulated for quality, consistency, and safety. The more plausible scientific hypotheses for how Yunnan Baiyao might work remain unproven.

The clinical research evidence is mostly negative, and even positive studies have not shown any significant effects on clinically meaningful objective outcomes.  No clear evidence of harm has yet been found, though the limited nature of the evidence does not ensure that the product is truly safe.

MacRae R. Carr A. The Effect of Yunnan Baiyao on the Kinetics of Hemostasis in Healthy Dogs. ACVIM  Forum, National Harbor, MD, 2017.

Follow us
This entry was posted in Herbs and Supplements. Bookmark the permalink.

23 Responses to Evidence Update and Review for Yunnan Baiyao