The media loves to run cute human interest pieces on alternative medicine for animals. Reporters are seldom interested in the complexities or nuance of the evidence, but they love the warm, fuzzy, and slightly humorous image of alternative medicine applied to pets. In the name of “balance,” they usually include a quote from a token skeptic, though this is generally buried in an avalanche of quotes from CAM supporters, and often is edited and positioned to seem as unconvincing and unsympathetic as possible.

More and more often, I’m being asked to be that token skeptic. It’s not a very satisfying role, since the chances are slim of seeing a final article that reflects the reality of veterinary CAM as a marginalized practice with little convincing scientific evidence behind it. Still, presumably having even a sanitized token skeptical voice in these pieces is better than having none. Right? Hmm, well I hope so anyway.

Here are a couple of examples.

This piece from New York Magazine, preciously titled Dogupuncture, includes 4 positive quotes, 1 negative quote, and a graphic right up front purporting to show the rising popularity of acupuncture among vets. Out of all that I have written about acupuncture, the quote chosen was the conclusion from a systematic review which concluded there was insufficient evidence to reach a conclusion! 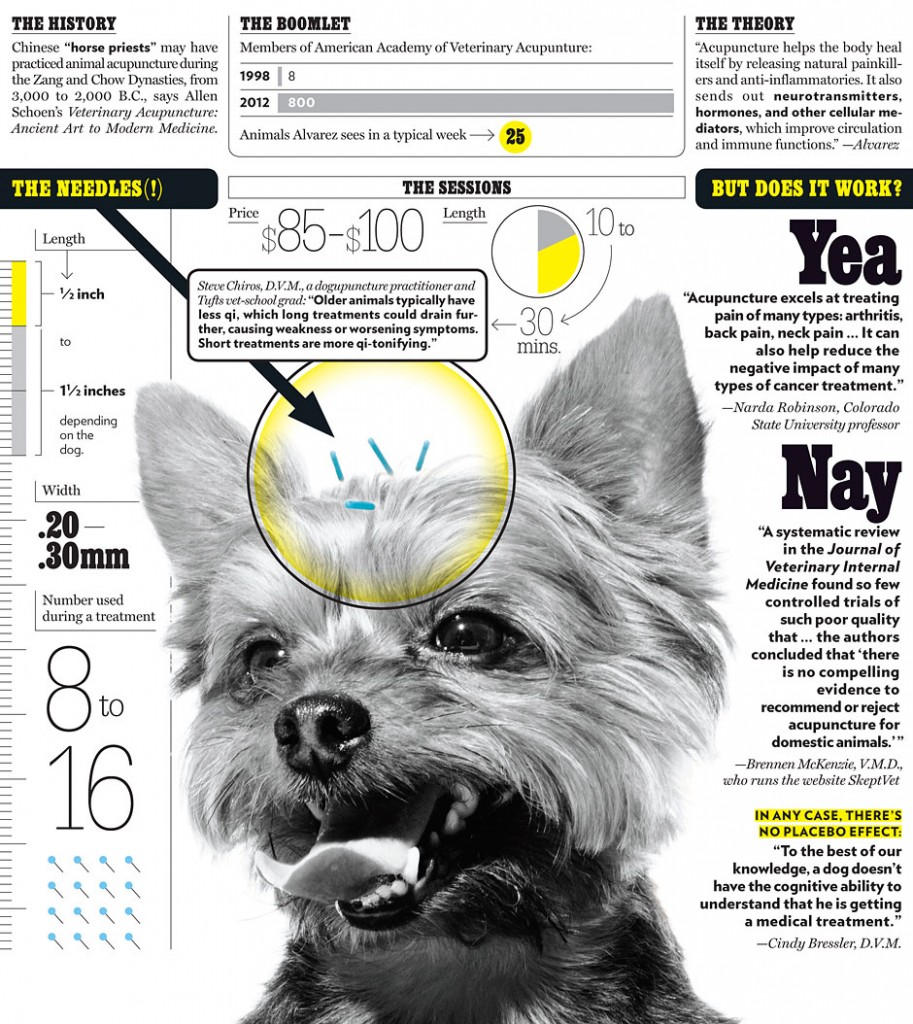 I have added a comment to give at least a bit of a response to some of the inaccurate implications of the pices, but that will likely only draw more angry responses from “satisfied customers” of veterinary acupuncture, rather than start a substantive discussion of the evidence.

The claim of ancient veterinary acupuncture is false: http://skeptvet.com/Blog/2010/07/the-history-of-ve… And it’s irrelevant anyway since bloodletting and slavery have been around as long or longer, and that doesn’t make them good ideas.

Even though animals don’t have beliefs about their care, there are absolutely placebo effects in veterinary care. The simplest is the Placebo by Proxy, in which the owner or vet thinks the pet is better because they want or expect it to be, and after all they are the ones who decide if the pet looks like it feels better. There is also Regression to the Mean, the Hawthorne Effect, Classical Conditions, Non-Specific Effects of Human Contact and many other factors that make bogus therapies look like they work.

Even in humans, acupuncture has not been shown to be more effective than fake acupuncture, and the evidence is even weaker in animals. (http://skeptvet.com/Blog/category/acupuncture/)

The bottom line is that belief in acupuncture, the popularity of acupuncture, and the length of time people having beein using acupuncture are all meaningless in terms of deciding whether or not it is useful. And despite decades or trying and a huge number of studies, scientific evidence still hasn’t shown it to be any better than placebo in controlled trials.  So the strength of the evidence for acupuncture is no better than that for faith healing, psychics, bloodletting, and lots of other healthcare practices that lots of people have believed in for a long time.

Unfortunately (for our pets), these things last because we so easily fool ourselves, and unreliable personal experiences are far more compelling emotionally than scientific data.

I’ve written previously about a Veterinary Practice News article on the Academy of Veterinary Homeopathy lawsuit against the American Association of Veterinary State Boards. It too is an example of a clearly one-sided piece with a token skeptic selectively cited in order to portray the skeptic position as weakly as possible.

The Veterinary Practice News reported on this lawsuit in early August. In a roughly 2000 word article, the author extensively quoted five supporters of homeopathy and of the lawsuit. She also quoted an official at the AAVSB who was not free to comment on pending litigation. And finally, she interviewed me for the article as the sole critic of the AVH position.

I was quoted as saying that homeopathy was not a science-based intervention, which is accurate. I was also quoted as saying that, “Alternative medicine providers are often better at treating psychological aspects of a medical incident an owner is dealing with, and there’s no doubt they are caring and compassionate…”This is partially correct in that I did acknowledge that alternative practitioners are undoubtedly as caring and compassionate as other veterinarians, but it misrepresents the point I was making that the reason methods like homeopathy are popular with a small percentage of the pet-owning public is not because they actually work but because of the psychological effects, essentially a placebo-by-proxy, that the interaction with the practitioner has on the owner.

Lastly, I was quoted as saying that, “these therapies are not taught in veterinary schools.” This is followed by a “gotcha” list of veterinary schools that offer elective courses in “integrative medicine” or have “holistic medicine” student organizations. This is clearly intended to undermine the credibility of my comments. However, this is again a manipulative misrepresentation of my position.

Homeopathy is clearly not part of the core veterinary curriculum, nor is it generally accepted as a valid approach to medicine at U.S. veterinary colleges. The AVH does not dispute this in their complaint. And of the four veterinary schools (out of 28 in the U.S.) mentioned in the article as having “elective courses in CAVM or integrative veterinary medicine,” I could not find any that actually do have a course in homeopathy, though CSU does offer an elective called “Critical Overview of Complementary and Alternative Medicine” taught by Narda Robinson, who is a vocal critic of homeopathy. It is possible, of course, that a couple of schools do have credulous individuals on faculty who teach that homeopathy is scientifically legitimate, but if so these represent a rare minority opinion which is discounted by the overwhelming majority of veterinary scientists. The article was a barely disguised propaganda piece for the AVH position with only a superficial nod towards the idea of journalistic neutrality.

There are a few other similar pieces I’ve been involved with that haven’t come out yet, but only one that I expect may be of higher quality than the usual sort like these.

Perhaps it’s the intrinsic character of the subject matter. Alternative medicine presents a simplistic and comforting face, and science is naturally complicated, ambiguous, and seemingly hypercritical. Or perhaps it’s the declining number of well-trained reporters specializing in science-journalism. After all, most veterinary stories appear in the Lifestyle section of magazines and newspapers, where the standards are lower than in the science, health, or news sections. In any case, as long as even a token skeptical voice is included, perhaps this will at least offer some comfort to those who value the messy truth over a good story.