Chronic kidney disease (CKD) is a common and important cause of illness in older cats. It is a frustrating disease for many reasons, especially the lack of a clear understanding of what causes CKD and the absence of a proven effective strategy for preventing it. Many theories have been advanced for what causes CKD, but the existing evidence is not conclusive for any of them.

Particularly popular among alternative medicine advocates is the notion that commercial diets and vaccines are important causes. The role of diet is not at all well-established. There are some studies suggesting that certain vaccines can induce the formation of antibodies against proteins in the kidneys of cats, but this has not yet been linked to actual disease. A new study evaluating risk factors for CKD in cats adds both some useful data and also some confusion to the subject.

This study involved signing up a large number of cats in the U.K. and collecting data about many aspects of their life and health. These cats were then followed over time, and differences between those who developed CKD and those who didn’t were evaluated. The results can’t be taken as proof that these differences are or are not direct causes of CKD, but it can help to identify potential risk factors.

Many different factors were evaluated, though of course the number of potentially relevant variables is enormous, so many were not evaluated which might still be important. As is common in this sort of study, most factors tested did not appear to differ statistically between the groups while a few did. The type of statistical significance testing used has come under growing criticism, with the major organization representing statisticians recently producing an unprecedented position statement suggesting this strategy be abandoned as misleading. This complicates interpretation of this and most other scientific studies employing this method. The results are presented in the two tables below. 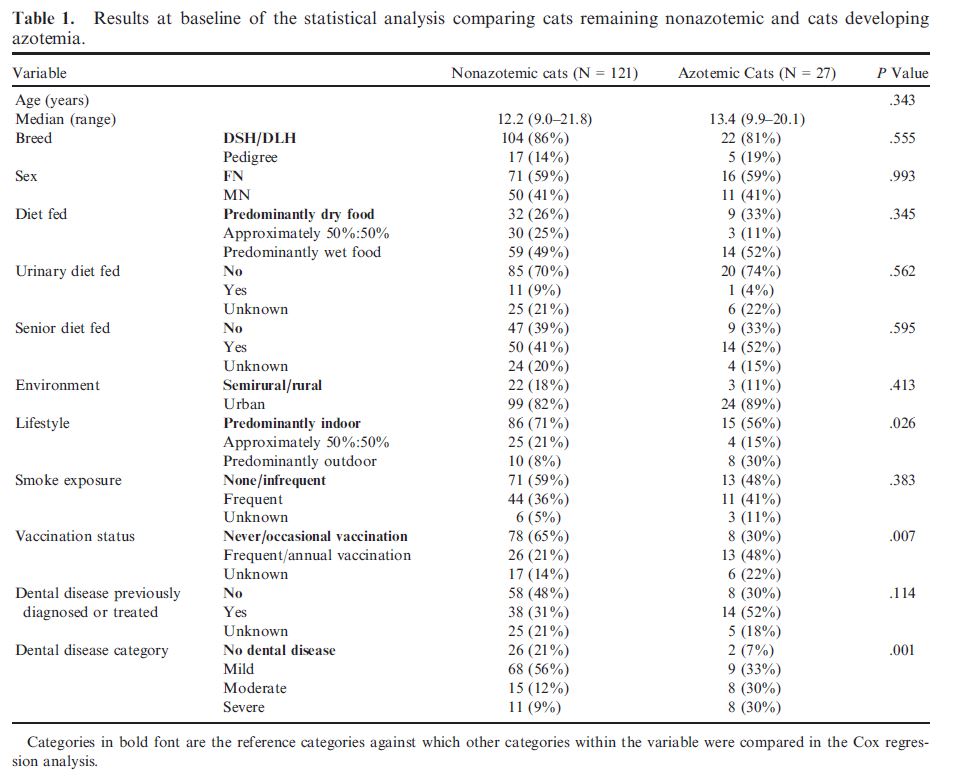 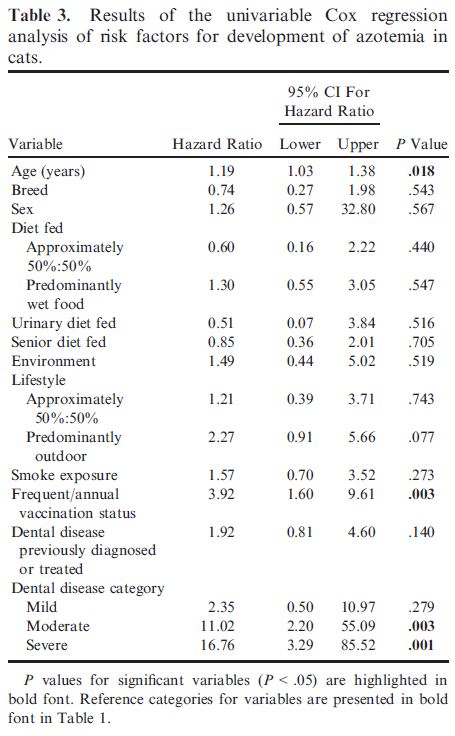 The first shows statistically significant differences in 3 of 12 variables compared, with more cats developing kidney diseases being predominantly outdoors, vaccinated every 1-2 years (as opposed to >/= 3 years or never), and having moderate to severe dental diseases. The second table shows the results of linear regression analysis intended to confirm statistical association between some of these variables and kidney disease. This analysis found statistically significant differences in 4 of 16 variables, with the risk of kidney disease being greater with increased age, vaccination more often than every 3 years, and moderate or severe dental disease. In this analysis, being predominantly outdoors did not reach statistical significance as a risk factor.

The association between vaccination and kidney disease in this study will undoubtedly fuel opposition to vaccination of cats among some owners and veterinarians. It is an important observation since it does suggest that vaccination may be a risk factor for this common disease. However, even if this is true, it suggests that the current vaccination guidelines, which include vaccinating no more than every three years and considering even fewer vaccinations in cats who are indoors only and not exposed to vaccine-preventable disease, are probably sufficient to eliminate or dramatically reduce this risk.

Unfortunately, no additional information about which vaccines might play a role and which components in those vaccines might increase the risk of kidney disease is available in this study. Until the potential association between vaccination and kidney disease is confirmed and a specific understanding of the causal relationships involved in available, the only reasonable response to the possible risk is to adhere to current vaccination guidelines. More radical action, as is likely to be advocated by anti-vaccine advocates, is not justifiable and will likely only increase the risk of preventable infectious disease without protecting cats from kidney disease.

The other variables associated with kidney disease in this study were dental disease, age, and possibly outdoor lifestyle. Because dental disease is a chronic infectious and inflammatory condition, it is quite plausible that this disease might increase the risk of kidney problems and other health conditions. This emphasizes the importance of good oral hygiene for cats. Age has long been associated with kidney disease, and confirming this does not provide much in the way of actions we can take to reduce kidney disease risk. Finally, the finding that predominantly outdoor living may increase kidney disease risk is interesting, but it would certainly need to be confirmed before we could confidently include this risk among the many known to be associated with letting cat roam freely outside.

As always, there are a number of limitations to this study that require us to interpret the findings with caution. The use of p-values, and the risk of evaluating many factors and drawing conclusions about the few that show a significant association has already been mentioned.

The other most significant concern is that almost half (43%) of the cats initially enrolled in the study dropped out, and no information about their development of kidney disease is available. If these cats differ in any way from the cats who were followed up, this could completely change the results of the study. Additionally, of the cats who were followed to the end of the study, only 27 developed kidney disease, which is a pretty tiny sample for this kind of epidemiologic survey. By comparison, several similar studies in humans have included between 4000 and 9000 individuals.

There are a number of other ways in which the cats in this study might not fairly represent other populations at risk for kidney disease. Most were from urban areas in the U.K., and there may be significant genetic and environmental differences between these cats and other populations, such as suburban or rural cats in the U.S. Also, much of the information about diet and vaccination was obtained from owners and was limited in detail and reliability. All of these factors influence the extent to which these results can be generalized.

Overall, this study highlights a few variables that might or might not influence the risk of kidney disease. Further study will be necessary to confirm both the positive and negative findings and elucidate the details of any real risk factors to allow meaningful action to be taken to reduce the risk of this common and serious disease.

16 Responses to Possible Risk Factors for Kidney Disease in Cats