Here are the notes and slides from my presentation on Overdiagnosis.

A 5 year-old Labrador retriever presents for an acute cranial cruciate ligament rupture. Otherwise, the dog is healthy in every way with no clinical symptoms other than lamenesss. However, pre-operative bloodwork shows moderate elevations in ALT, and an ultrasound exam shows some indistinct, mildly hypoechoic nodular lesions in the liver. An ultrasound-guided needle biopsy is performed which ultimately shows benign nodular hyperplasia. Unfortunately, the dog dies of complications from the biopsy procedure. What this dog really died from, however, was overdiagnosis.

Veterinarians, especially early in their careers, are often fearful of misdiagnosis; incorrectly identifying disorders in their patients or diagnosing diseases the patients do not actually have. However, few worry about the dangers of overdiagnosis; the correct diagnosis and treatment of disorders patients do have but which will never cause clinical symptoms or mortality.

Overdiagnosis is now recognized as a common and serious problem in human medicine which causes significant harm in terms of cost and suffering for patients and their caregivers. There are annual international conferences on preventing overdiagnosis, and a consortium of seventy specialty groups has created the online resource Choosing Wisely (www.choosingwisely.org) to help physicians and patients make better decisions and reduce overdiagnosis and overtreatment. Changes in clinical practice guidelines for many conditions, including highly publicized changes in breast cancer and prostate cancer screening programs, have resulted from the recognition that overdiagnosis harms patients. Yet the subject of overdiagnosis is virtually unknown in veterinary medicine.

HOW COMMON IS OVERDIAGNOSIS

A challenge in controlling overdiagnosis is that there is no absolute way to know in advance if a finding in a particular patient is going to prove clinically important or not. This can only be known after sufficient time has passed to evaluate whether or not the finding has resulted in disease or death. However, it is possible to evaluate the frequency of overdiagnosis in a population based on the frequency of diagnosis and mortality data for specific conditions and populations. As an example, CT imaging of clinically healthy people frequently leads to diagnosis of cancers which, based on mortality figures, are never going to lead to early mortality (Table 1).

Table 1. Detection and risk of mortality from cancer using CT imaging in asymptomatic humans. (From Welch, 20121)

Similar data is available for many other diseases suggesting that overdiagnosis is extremely common in human medicine. There is no published data specifically addressing the frequency of overdiagnosis in veterinary medicine.

WHAT IS THE HARM OF OVERDIAGNOSIS?

The diagnosis of diseases that are unlikely to ever cause significant illness or mortality causes harm in several ways. The testing leading to diagnosis, and the treatment often offered once such a diagnosis is made, have financial costs. It is estimated, for example, that overdiagnosis and overtreatment of clinically irrelevant lesions detected through mammography costs $4 billion annually in the United States alone.2 Another study suggests that unnecessary treatment of people with mild hypertension in the U.S., with no benefit in terms of reducing symptoms or early mortality, may cost $32 billion annually.3

These are only estimates for the costs of overdiagnosis for two diseases in one country, so the global financial cost is undoubtedly much greater. And despite the impulse to feel that no price should be put on efforts to improve health and treat disease, it is undeniable that such waste raises the overall costs of healthcare and reduces access for some people, all without any benefit to patients.

There are no estimates of the costs of overdiagnosis in veterinary medicine. The economic model of the veterinary profession is quite different from human medicine, and the financial costs of overdiagnosis may not impact the overall cost of veterinary care or the availability of care as dramatically. However, these costs are still a waste of client resources, and they can reduce the ability of some clients to pay for subsequent care that may be necessary or beneficial for their animals.

The financial costs of overdiagnosis, however, have not been the major drivers of change in clinical practice in human medicine. This has been the physical and emotional harm to patients. Diagnostic testing and treatment for conditions not destined to cause illness or death can cause both physical injury an psychological distress. It has been estimated that, for example, that prostate specific antigen (PSA) screening for prostate cancer in men will identify cancer in 30-100 patients who would never have been clinically effected for every death such testing prevents.1 And for these men who are overdiagnosed and go on to have biopsies or treatment, up to 50% will experience sexual dysfunction, 30% will have urination difficulties, and 1-2 per thousand screened will die as a result of unnecessary treatment. Research has also shown that quality of life diminishes after a diagnosis of prostate cancer, and that the risk of suicide and cardiovascular death increases immediately following such a diagnosis.4-5

Similar evidence of physical and psychological harm from overdiagnosis is available for many other conditions in human medicine. There has been, however, no published research on the risks of overdiagnosis in the veterinary field.

Overdiagnosis is driven by numerous factors. Screening tests, imaging, and other diagnostics employed without specific clinical justification frequently lead to the detection of abnormalities. Such abnormalities are far less likely to be clinically important than those which cause symptoms, and therefore they often represent overdiagnosis. However, once an abnormality is detected, some of the psychological harm to patients or caregivers has already occurred. And because of the anxiety induced by the finding and the desire of both clients and doctors to take some action, even when it is unclear this will benefit the patient (a phenomenon known as “commission bias”6), further testing and even therapy often results from an initial overdiagnosis.

Overdiagnosis also stems from the development of more sensitive tests, which identify conditions earlier and prior to the onset of clinical symptoms. Expanded definitions of disorders which encompass patients previously not consider to have these disorders can also lead to overdiagnosis and overtreatment. Psychologically, doctors are prone to overdiagnosis because they are likely to be punished, in the form of blame or even litigation, for failing to diagnose a medical condition if it does eventually lead to symptoms or death. However, doctors are almost never punished for unnecessarily diagnosing and treating conditions which would never have cause any harm if undiagnosed.

The inappropriate reliance on anecdotal evidence and clinical experience to guide diagnostic practices also contributes to overdiagnosis. Even in the face of strong evidence, for example, that mammography of women under 50 years of age leads to significantly more harm from overdiagnosis than benefit from earlier diagnosis and treatment, there has been significant resistance to the change in screening guidelines implemented to reduce this harm. Much of that resistance is justified with the use of anecdotes of women who had been diagnosed and treated for breast cancer because they and their doctors believed, rightly or wrongly, that this intervention had saved their lives.

Any doctor who believes their use of screening or other diagnostic interventions in asymptomatic patients has saved someone’s life will be very reluctant to stop using those interventions regardless of the evidence that they do more harm than good. Individual stories are always more psychologically compelling than statistically data. But acting on our emotional response to such stories and ignoring the evidence for regarding overdiagnosis ultimately causes more unnecessary suffering for real patients.

Patients are similarly inclined to seek diagnosis and take action on it even if the statistical evidence suggests it is in their best interests not to. Doing so gives people a sense of control over their fate, or that of their animals. Even if this sense of control is an illusion, it tends to outweigh rational considerations. One survey found that 98% of people mistakenly diagnosed with cancer through screening were still glad they had had the test once the follow-up evaluation showed they actually did not have cancer.7 Like doctors, patients are inclined to take action rather than choosing inaction, even when inaction is demonstrably the better choice.

Finally, we cannot ignore the potential influence of financial interests on overdiagnosis. Companies selling diagnostic tools and veterinarians using them receive income from the use of these tools. And the follow-up testing and treatment of diseases, even when they are overdiagnoses, also generates revenue. While doctors are unlikely to intentionally pursue unnecessary testing and treatment purely for financial gain, it would be naive to imagine such revenue has no impact on doctors’ decision making. Federal law prohibits doctors from referring patients to diagnostic facilities in which they have a financial interest because research has shown such an interest increases the number of tests done and the costs to patients.8-9 There is no reason to believe veterinarians to be exempt from the same potential for financial self-interest to influence clinical decisions.

HOW DO WE REDUCE OVERDIAGNOSIS & OVERTREATMENT?

The first step in reducing the harms from overdiagnosis is to understand the phenomenon and its causes. This includes developing the data to identify overdiagnosis of specific conditions. Because overdiagnosis can only be identified in retrospect in individual patients, we must gather and analyze epidemiologic data to recognize the level of risk for overdiagnosis of particular diseases. We cannot safely rely on anecdotes and uncontrolled clinical experience alone to drive our diagnostic and therapeutic practices. We need data.

In the meantime, in the absence of such data, the best strategy is to understand the limitations of our diagnostic tests, including important measures such as their positive and negative predictive value, which help us to appreciate the likely significance and reliability of test results in particular patient populations.  We should also ensure that we have an appropriate clinical index of suspicion for any condition before we begin testing for it. “Fishing expeditions,” “shotgun diagnostics,” indiscriminate imaging, and other such irrational diagnostic practices raise the risk of overdiagnosis.

We must also learn to accept the inevitable uncertainty in medicine and be honest with clients about our ability to predict and control all patient outcomes. We need to recognize and disclose that testing and treatment have costs and risks as well as benefits, especially in patients without significant clinical symptoms associated with the disorders we are trying to diagnose and treat. Though it is psychologically more difficult for us, it is often wiser to avoid action when there is not good evidence to show that our actions will truly benefit our patients. Don’t just do something, stand there! 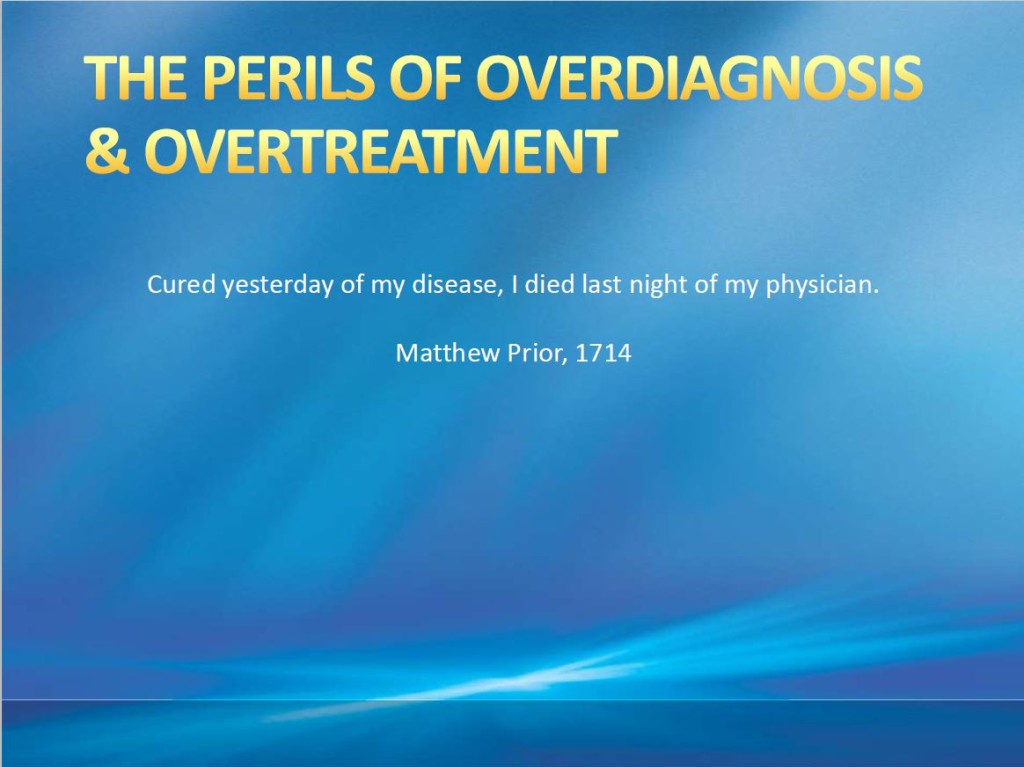 6 Responses to WVC 2016: Overdiagnosis and Overtreatment