Numerous studies have demonstrated that raw diets are likely to be contaminated with potentially harmful bacteria, including Salmonella, E. coli, and others that can cause serious disease. (1, 2) Though cases of illness have been documented caused by these organisms in raw foods, it is not clear how great the risk is for pets or for humans handing raw pet food or living with pets eating such diets. And it is true that cooked commercial diets have been found to be contaminated with such bacteria as well, which advocates of raw foods have sometimes used as evidence that raw diets are no riskier than cooked. A new FDA study, however, shows quite clearly that the risk of bacterial contamination is far greater for raw pet diets than for cooked commercial foods.

The Pet Food Study was a two-year survey of pet foods that evaluated over 1000 samples. Raw foods were only included in the second year of the study, in which 196 samples of commercial raw diets were tested.  The table below compares the occurrence of two important pathogenic bacteria in dry cooked diets and raw diets. 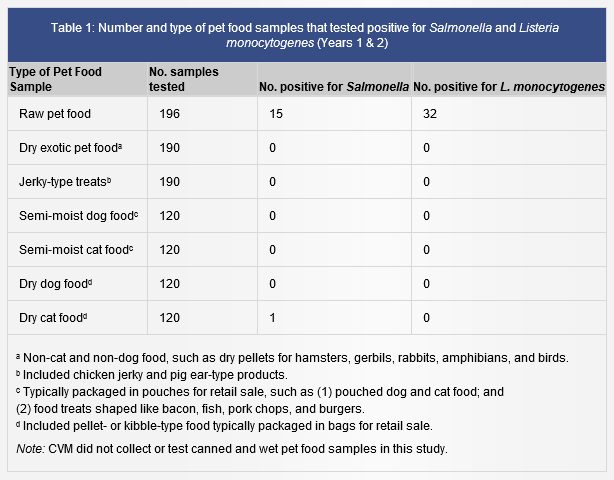 Clearly, both bacteria are far more likely to be found in uncooked than in cooked pet foods. The prevalence of Listeria was particularly alarming because 90% of people infected with this bacterium are hospitalized, and 20-30% die. While the annual number of cases of this disease is small, it makes no sense to risk a serious and frequently deadly illness in order to provide a raw diet for your pet which has not been shown to have any health benefits for them.