Mammary Tumors in a Population of Dogs in Mexico

One of the topics that comes up most commonly in my ongoing coverage of the research concerning neutering dogs is mammary tumors. Mammary tumors occur overwhelmingly in female dogs, and they are far more common among intact females than neutered females. Though a recent systematic review identified significant limitations in the existing research on mammary tumors and neutering in female dogs, the evidence that does exist, including basic physiology, human health research, and the limited studies in dogs, all support intact status as a major risk factor for the development of mammary cancer and all suggest that neutering is protective against this disease. A recent retrospective study of biopsy samples analyzed at a university in Mexico illustrates many of the limitations of the available literature, and yet it too supports the association between intact status and mammary cancer in female dogs.

The study involved reviewing biopsy samples from dogs submitted to the university pathology lab. This kind of study always raises questions about the applicability of the results to canine patients in practice since the population studied are only those whose owners have had biopsy samples sent to a university lab. This is likely to be a very different population from that seen in primary practice, so the relationships identified may be different. However, when the data are quite consistent with multiple other studies in different populations, as these are, in can compensate somewhat for this limitation.

The study found that the vast majority of mammary tumors came from intact female dogs (99%). Of these, about half were benign and half malignant, which is a typical proportion. There were some differences between breeds, and though this is one of the results most affected by bias in the selection of the study population, the general pattern of tumors being more common in small breeds than in large breeds is consistent with data from other studies.

The overall proportion of biopsies that were from mammary tumors was pretty constant over then ten year study period, at about 16.8%. However, the relative proportion of these tumors that were malignant appeared to increase, suggesting that mammary tumors in this population may be becoming more frequently malignant. The authors offer some speculation about possible causes for this, but this is not the kind of study that can provide any causal evidence. 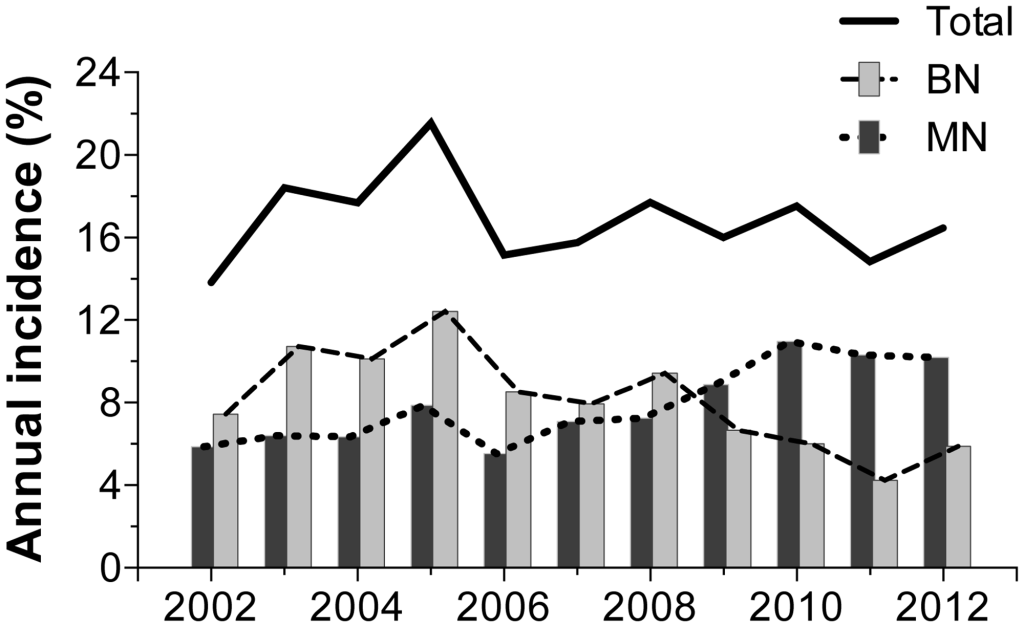 On the whole, this study offers limited additional information relevant to the issue of neutering and mammary cancer, but it is at least consistent with the majority of studies that do find this to be a disease almost entirely confined to intact females, which strongly supports neutering as a preventative measure. Of course, this represents only one risk/benefit issue to consider in the larger, and quite complex, decision whether or not to neuter an individual dog.