Music Therapy for Dogs: Does Your Dog Really Prefer Reggae to Pop?

Playing music has become a popular method for reducing stress in animals who are hospitalized or kenneled. A couple of years ago, I reported on a review of the literature investigating this practice. The conclusion of that review was this:

The studies described above support the idea that physiological and neurochemical changes can result from music exposure. Music’s ability to improve learning and memory and diminish stress suggests that music can result in positive physiologic effects. Other studies, however, suggest that music has no observable effect or can have a detrimental effect on animals. There is not yet sufficient evidence to suggest that animals react physically to music in a way that can be manipulated predictably and consistently.

Since then, a few new studies have been published, and I want to briefly review two of them since once has been making headlines recently. 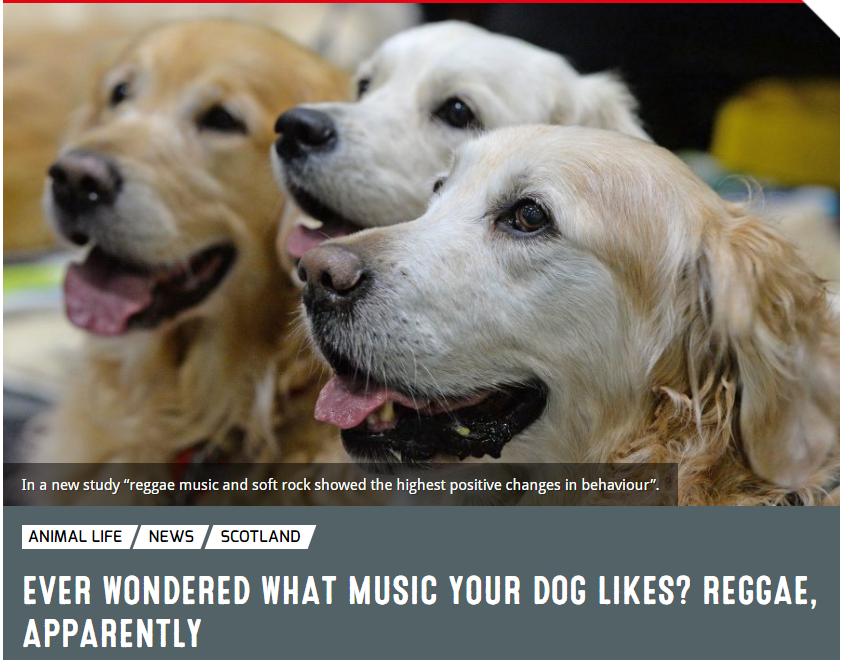 The first study was published in 2015.

In this experiment, 50 dogs at two rescue shelters were assigned to be monitored during a period with no auditory stimulus and a period in which classical music was played. Heart rate monitors were used to measure heart rate variability (HRV), salivary cortisol levels were measured, and behaviors, such as time spent standing or lying down and barking, were observed. The hypothesis was that these proposed measures of stress would improve during the time the classical music was being played.

The results were mixed. The cortisol levels were too variable to show any association with the music. Cortisol has long been used as a measure of stress, but it is highly problematic and often cannot be convincingly shown to truly represent the level of stress an animal is experiencing at a given time. HRV showed some changes that might be consistent with a reduction in stress, though the exact significance of this measure in the well-being on dogs hasn’t been definitively shown either. And finally, the behavioral measures suggested the music reduced possible signs of stress. During the music condition, dogs appeared to lie down more and bark less.

There were a number of limitations to this study. While two groups of dogs experienced the music and silent conditions in different orders, it is not clear how the animals were selected for the study in the first place. And the authors acknowledge that not all animals were available for all observation times or finished the study, but no details on this are reported. And it is not stated whether observers were blinded to the treatment, which is key when using behavioral observations as a measure of effect. Finally, the study appeared to show that the effects of the music treatment that were observed only lasted as little as one day, and that continuing to play the same music beyond this time had no effect.

Overall, this study adds a bit of evidence to suggest that classical music might have some effects on dog behavior. However, while some findings are consistent with other studies, some are not. And the significance of some of the measures used and the changes seen are not clear.

The second study was done by the same group in the same facilities on a smaller group of dogs (38).

The methods used were very similar. However, the major difference was that a period of observation when no music was played both preceded and followed the period of music exposure. In addition, the genre of music varied each day during the music exposure period. Also, cortisol levels were measured in urine rather than saliva, which it was hoped would reduce the individual variability a bit. Otherwise, the circumstances and the limitations were similar to the previous study.

The results again showed changes in HRV that were suggestive of a reduction in stress during the music condition. Some behavioral changes were also observed that matched those seen in the previous study (an increase in time spent lying down, for example), but other behavior changes seen previously were not seen in this study (for example, there was no reduction in barking during the music condition). Finally, the cortisol levels showed a changed that was the reverse of what would be expected, showing an increase during the music condition as would be expected with an increase in stress. There were some small differences in HRV and behavior between different genres of music, but there was no clear, large, consistent evidence that one genre is better than another.

This figure illustrates how really small the differences between silence and music, and between different genres of music, were in this study. While some of these differences were statistically significant, that does not automatically mean they were clinically meaningful. 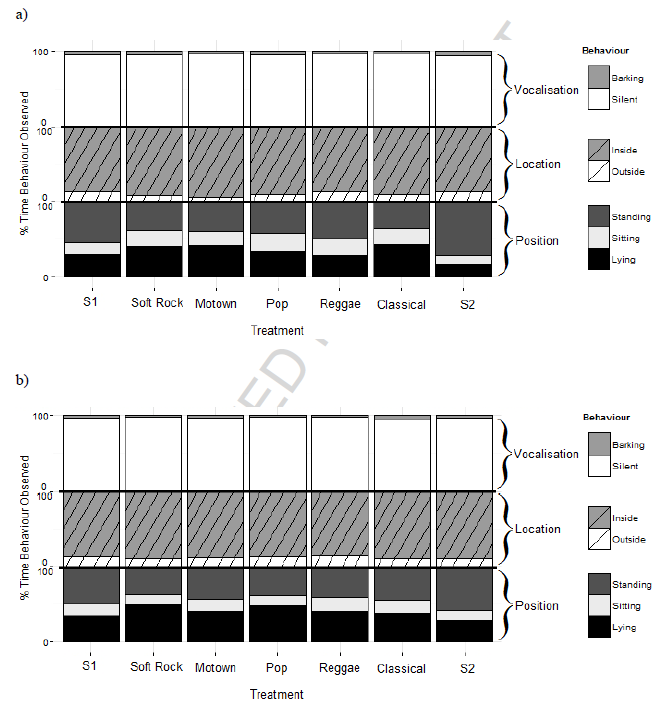 These mixed results illustrate the general level of uncertainty regarding the effects of music on stress in dogs. While they can be interpreted to suggest a benefit (as the authors do), the size of the effect is small and the pattern of changes varies enough from study to study that it is hard to be certain there is really a consistent effect. And since several of the measures used in these studies may or may not actually reflect stress experienced by the dog (such as HRV and cortisol levels), changes in those measures may not reflect real improvement.

This raises the bigger question of how do dogs really benefit from the kinds of effects seen in these studies? Behavioral and physiologic measures suggest they might be showing less of a stress response, and presumably that implies they feel less anxious or fearful, but of course it is really difficult to confidently judge how an animal feels from such proxy measures. And is a small reduction in stress for a few days a meaningful improvement in welfare? Would it be more worthwhile to focus on interventions that have measurable impact on health, adoptability and the behavior problems that keep pets from finding lifelong homes, etc?

Finally, there is the question of whether music does any harm to these dogs. Certainly, we’ve all been trapped listening to someone else’s music we couldn’t stand, and it can be a miserable experience. Before we force dogs similarly trapped in kennels or hospitals to listen to music, we want to be certain we aren’t making their experience worse. Unfortunately, these studies don’t appear to look specifically for negative effects. The fact that cortisol levels in the second study changed in a way you would predict with an increase in stress was dismissed as insignificant, but we should at least consider the possibility it represented the reaction of the dogs to the music more accurately than the more subjective behavioral measures. I tend to agree with the authors that cortisol levels are notoriously unreliable markers of stress, but if we choose to use them in studies like this, we can’t simply choose to interpret the numbers in the way most congenial to our pre-existing hypotheses.

Bottom Line
These new studies at a little bit of evidence to that covered in the review I wrote about previously. In general, they do suggest that some kinds of music, such as classical and “soft rock,” might help reduce arousal, stress, and anxiety in dogs in a rescue shelter. Overall, however, the evidence for this hypothesis is still weak.

There is little evidence of any harm from most music interventions, though unfortunately this is not always something investigators specifically look for.

On balance, then, I think it is possible that music might have some benefits for dogs in stressful circumstances, such as boarding kennels, hospitals, and shelters, but this is by no means clearly proven. The risk is also likely quite low, so there is probably little harm in using quiet music for this purpose so long as it is not substituted for other, more comprehensive approaches to reducing stress and anxiety.

5 Responses to Music Therapy for Dogs: Does Your Dog Really Prefer Reggae to Pop?