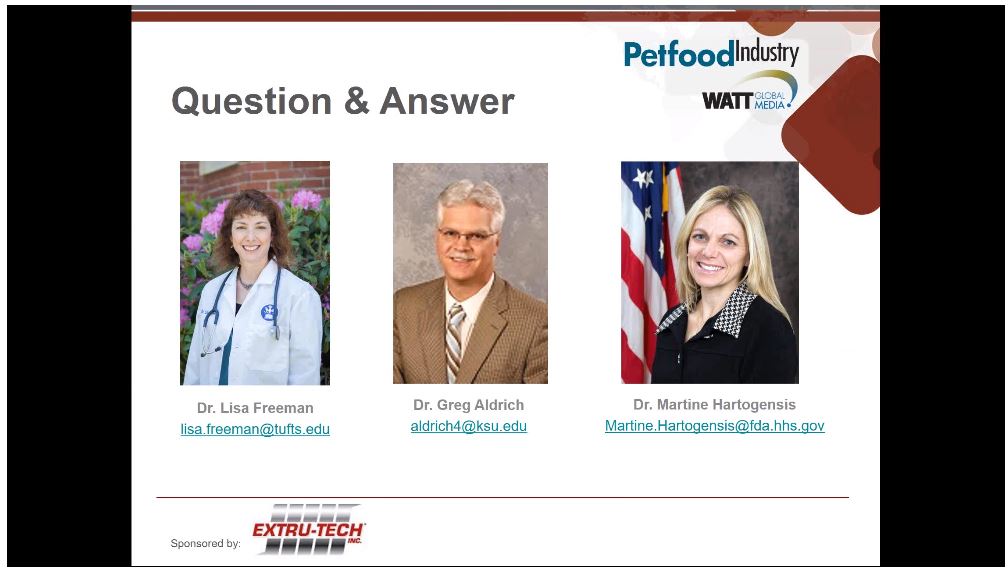 FDA noted ~ 30 case reports had been filed with them with dogs on grain-free and legume/tubers containing diets.

Dr. Sterns at UC Davis has been looking at taurine-deficient DCM in Golden Retrievers for about 3 years

May be deficient in taurine or precursors, decreased absorption, increased elimination, other variables

Recommendations-
All DCM cases should have full diet history, screen for taurine, supplement taurine whether low levels or not, change to more typical diet

Grain-free diets are ~ 25% of the dog food market, so not going away
Even with a large supply of relevant amino acids in meat meal, if the bioavailability is not high enough there may not be enough on an as-fed basis

Legume seeds/pulses lower in methionine than traditional cereals and lower bioavailability. They also have some soluble fibers in them which can influence bacterial fermentation in the colon which can deplete taurine.

Potatoes don’t really contribute to the protein in a diet, so unclear how any association with taurine levels might work

Q&A
Hartogensis-
FDA uses cat taurine levels as guideline since likely to be higher than dogs need, so in foods identified as not deficient this means they meet the cat requirement

Number of reports has, of course, increased since FDA announced it is investigating this, and many do not appear to be genuinely related to this issue; The 160 dogs mentioned are confirmed DCM diagnoses by echocardiogram.

Even though most notable association has been legumes/tubers/boutique diets the FDA is looking at other possible causal factors but so far no other clear signals. No clear pattern related to particular protein source in diets.

Freeman-
BEG Diets= boutique (small manufacturers but not willing to define specifically), exotic ingredient, grain-free diets. Reiterated majority of DCM cases on these diets have not been taurine deficient.

Aldrich-
Worth bearing in mind that < 200 animals known to be affected out of ~100 million pet dogs, so scale of the problem does not yet appear very large

Hartogensis/Freeman-
Recommendation to pet owners is to speak with veterinarian about nutrition since a lot of the information and advice people seek and use to guide feeding comes from marketing, pet food stores, and other sources without necessarily a sound, science-based approach.

Freeman-
Very few reports from countries outside the U.S. at this point.